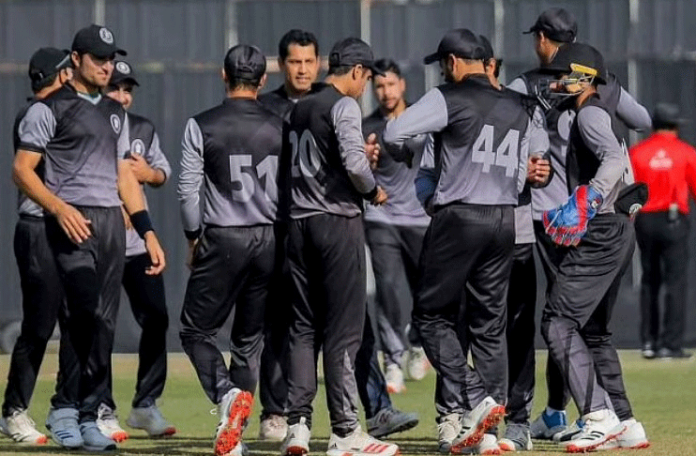 In the 12th match of the ongoing domestic event, KPK have strengthened their top position with a thumping victory of 113 runs over Sindh.

Batting first, the defending champions managed to score 220 before being bowled out in the last over.

Ahmed Khan and Sameen Gul provided a gritty 70-runs partnership for the ninth wicket to anchor the innings when the side was stranded at 121-8. Ahmed scored 44, while Sameen top-scored with his 46. Young wicket-keeper batter Mohammad Haris, on the other hand, scored an important 33 off 35 balls, up the order.

For Sindh, Danish Aziz led the way with three wickets, while Abrar Ahmed and Sohail Khan bagged two each. Mir Hamza and Anwar Ali, on the other hand, managed to make one scalp.

Set to chase 221, Sindh’s batting line-up failed and was bowled out for a mere 107; handing a thumping 113-runs victory to KPK.

The right-handed opening batter Khurram Manzoor resisted a bit with his gritty 26, while the rest of the batters walked back to the pavilion after scoring cheaply.

For KPK, Khalid Usman starred; taking a five-fer, while Arshad Iqbal and Sameen claimed two wickets each. Asif Afridi, on the other hand, struck out a batter.

In the 10th match of the Pakistan Cup, the second-ranked Balochistan sealed a crushing eight-wicket victory over CP, thanks to the unbeaten century from Imran Butt.

Set to chase a skimpy 180, Imran’s brilliance drove the side to the victory in the 37th over. The right-handed batter scored an unbeaten 100 off 168 balls, laced with eight boundaries, while Haseebullah and Abdul Wahid Bangalzai also chipped in with 32 each.

Batting first, CP batters failed to bolster their side at a commendable position as the side could only score 179 before being bowled out in the 28th over.

For CP, Qasim and Raza showed resistance with the bat also as Raza scored a valiant 39, while Qasim top-scored with an astonishing 63. The rest of the batters, on the other hand, remained clueless in front of Balochistan’s bowling attack.

For Balochistan, Yashir Shah and Akif Javed took three wickets each, while Khurram Shahzad picked two. Amad Butt, on the other hand, claimed one wicket.

In another match of the ongoing domestic event, SP edged past Northern by 67 runs to secure their first victory of the tournament.

Batting first, Salman Ali Agha’s power-show with the bat powered the side to a commendable total of 284 before bowling out in the 49th over.

Salman scored a terrific 171 off 204 balls, laced with 18 boundaries and six maximums, while the rest of the batters could not contribute significantly.

Set to chase 285, Northern bowled out for 217 in the 44th over despite brilliant knocks of Mubasir and Rohail Nazir. Mubasir top-scored with 63, while Rohail scored a valiant 40 but the two could not steer their side to the victory as the rest of the batters made their way back after scoring cheaply.

For SP, Aamer Yamin, Khushdil Shah, and Muhammad Imran bagged two wickets each, while Mohammad Abbas Afridi and Salman made one scalp each.