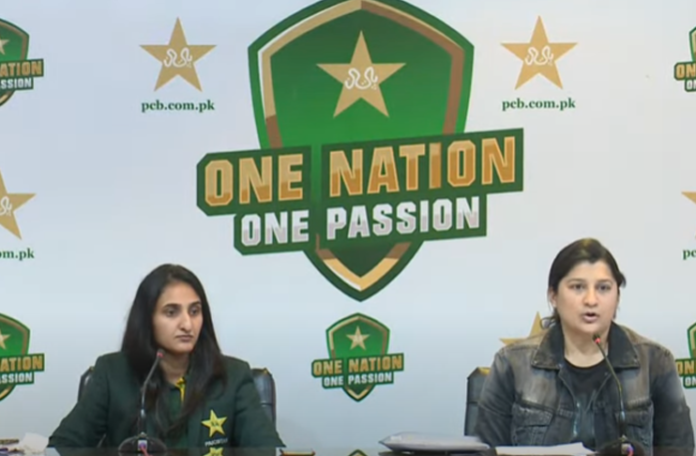 Former captain – Bismah will captain the side in the global event as the 30-years-old made her comeback into the side after a gap of two years, Nida Dar will be playing as the Vice-captain.

Apart from Bismah, Nahida Khan and Ghulam Fatima also made their return to the national side as Kainat Imtiaz and Sadia Iqbal were ruled out of the event; sustaining injuries.

Taking to Twitter, the Pakistan Cricket Board (PCB) also shared the women’s squad for the upcoming World Cup.

The returning captain of the Pakistan Women’s team – Bismah expressed gratitude for making her comeback, while also setting the semi-final of the event as the target for the green shirts.

“I am glad to be back in the team while aiming to reach the semi-finals of the World Cup,” she said.

Bismah also said also commented on the Pakistan-India face-off, said she is hopeful that the team will handle the pressure effectively.

“Our first match is against India. We will try to handle the pressure well,” she said.

“We are focusing on all the matches, the fitness of the players is good. Hopefully, we will meet the expectations,” she concluded.

Asmavia, on the other hand, said the selection committee has formed a balanced team and is hopeful of the team doing well in the tournament.

“We have formed a balanced team and the players are expected to perform well,” she said.

“All the players are included in the team based on their performance and fitness,” she concluded.

The upcoming Women’s World Cup 2022, will kick off on March 4 with the hosts New Zealand taking on the West Indies in the curtain-raiser, while the final of the event will be played at Hagley Oval on April 3.

Pakistan will start their World Cup campaign against the arch-rival India on March 6 at Bay Oval. The green shirts will play seven matches against the remaining teams. The top four teams from the group of eight participants will then qualify for the Semi-finals.