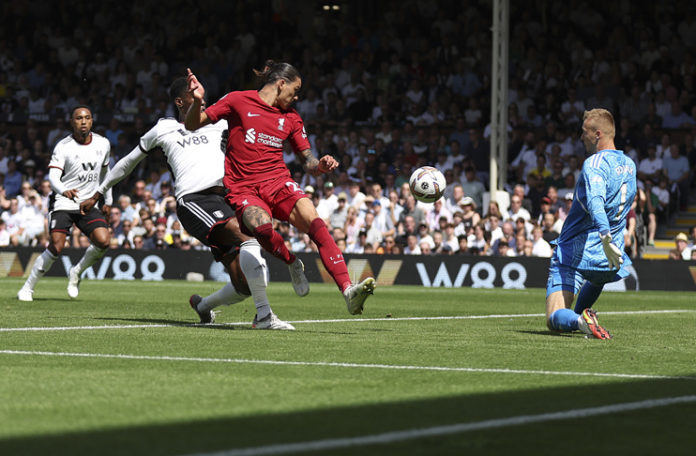 LONDON: Jurgen Klopp admitted Liverpool deserved no more than a 2-2 draw against newly-promoted Fulham in a pulsating start to their Premier League season on Saturday.

Aleksandar Mitrovic twice put the impressive hosts ahead, but Darwin Nunez came off the bench to make a huge impact on his Premier League debut.

The Uruguayan, who arrived at Anfield in a deal that could rise to 100 million euros ($102 million) from Benfica, flicked home to level at 1-1 and then teed up Mohamed Salah for an equaliser 10 minutes from time.

Liverpool’s season had got off to a flying start by getting the better of Manchester City to win the Community Shield in what was billed as an early showdown between the two title contenders.

However, the Reds were punished for a sluggish performance in the first hour in what could prove a costly concession of two points.

“The best thing about the game was the result,” said Klopp. “We got a point from a really bad game.

“The result was fine, I don’t think we deserved more than that. The performance can be massively improved.”

Mitrovic scored 43 goals in as many games last season as Fulham romped to the Championship title and gave Liverpool an early warning as he stabbed just wide inside the first minute.

Much to Klopp’s frustration on the touchline, the visitors did not wake from their slumber and were finally punished on 32 minutes when Mitrovic outmuscled Trent Alexander-Arnold at the back post to head in Kenny Tete’s cross.

“We have to respect Liverpool but of course do our job and trust ourselves,” said Fulham boss Marco Silva. “We did a great first half, almost perfect the way we controlled and blocked. In the second half, we matched them.”

Liverpool flickered into life before the break as Luis Diaz smashed against the post from a narrow-angle.

However, it was not until the introduction of the towering presence of Nunez that the Champions League finalists began to pose a persistent threat.

Nunez was at fault when Fulham were inches away from doubling their lead when he was caught in possession and the ball was fed to Neeskens Kebano, who drilled off the inside of the post.

At the other end, Liverpool’s new striker quickly made his presence felt as an audacious flick from Salah’s cross was saved by Marek Rodak.

Moments later a replica move did deliver Nunez’s first Premier League goal as he backheeled in from Salah’s low cross 26 minutes from time.

At that point, there appeared only one winner, but Mitrovic showed a surprising fleetness of foot to turn Virgil van Dijk, who clipped the Serbian striker inside the box.

Mitrovic coolly slotted the resulting penalty low past Alisson Becker, but Fulham failed to hold out in the final 18 minutes for a famous win.

Another long ball into the box towards Nunez caused panic in the Fulham defence and the ball eventually fell kindly to Salah to score on the opening weekend of the Premier League for a sixth consecutive season.

Liverpool could even have snatched victory five minutes into stoppage time when Jordan Henderson’s long-range strike came back off the crossbar.

But a point was the least Fulham deserved as they made a strong start in their bid to avoid relegation for a fourth consecutive season when in the top flight.