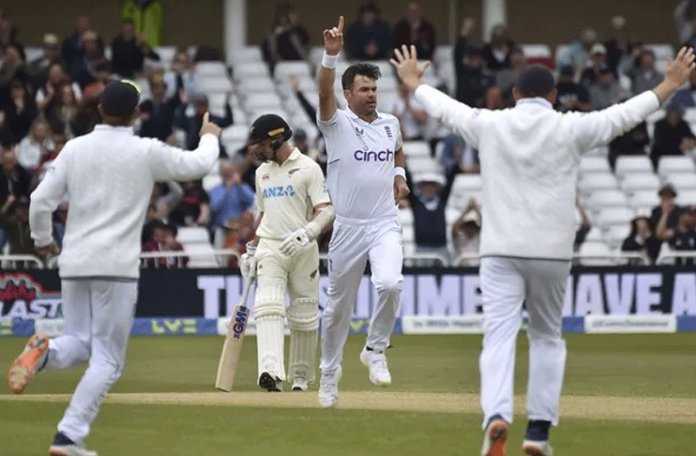 NOTTINGHAM: The second Test has entered into a crucial phase as New Zealand squeezed out a handsome lead of 238 runs lead in the second inning with three wickets remaining before England were all out on 539 runs in their first inning on day four, here at Trent Bridge on Monday.

England’s fast bowler James Anderson struck an early wicket which marked his 650th Test wicket before Will Young and Devon Conway stood firm and made a crucial 100-runs partnership in the second inning to bolster New Zealand’s stake in the game.

The strong-looking pair derailed as Conway fell prey to slow left-arm orthodox Jack Leech before tea on 52 runs and Young faced a forced departure through run-out on 56. Henry Nicholls fell cheaply between the two wickets.

The middle-order batters Daryl Mitchell continued to move the scoreboard for his side as he remained not out on 32 by the end of the day’s play supported by Tom Blundell and Michael Bracewell for brief periods on the crease.

New Zealand will resume the play on the action-packed final day of the second Test on 224/7 as England’s bowler will try to bundle out the touring side early in the day.

England, on the other hand, started the proceeding of day four on 473/5 with Joe Root batting majestically on 163 runs. He failed to reach the double century and fell prey to left-arm pacer Trent Bould after playing a glittering knock of 176 runs.

New Zealand bowlers then stormed through the lower order of England’s batting and bundled them out 539 in the first session.

It is pertinent to mention here that England have 1-0 lead in the Test series as they beat the tourists by five wickets in the first Test match at Lord’s.