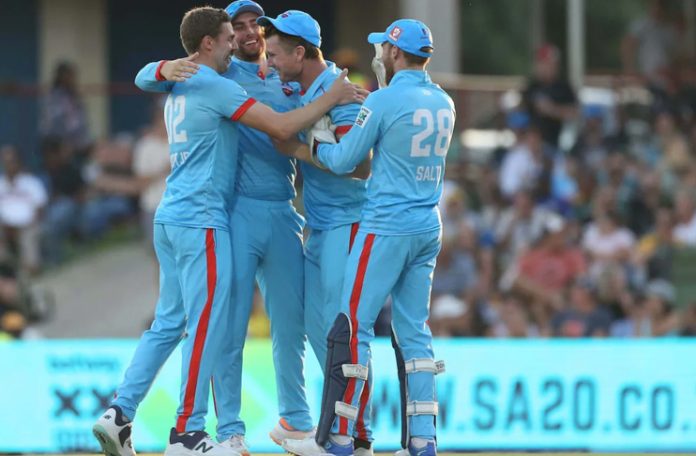 Electing to field first, Neesham and Nortje led the bowling attack as the two shared six wickets between them to help Capitals bundle out JSK for 122 in the 16th over.

In reply, Will Jack set the tone of the chase as he surged Capitals to 46 in 3.3 overs before he fell prey to Nandre Burger on 34 from 16 balls, while his opening partner Salt remained unbeaten on 52 off 30 balls to steer his side home with seven overs to spare.

Skipper Faf du Plessis, however, was a standout among JSK’s batters as he made a quick-fire 51 from 22 balls while the rest failed to add any substance to the innings.

The former South Africa captain remained undeterred by the early blow that came on the very first ball when Eathan Bosch dismissed Reeza Hendrick on a golden duck. Du Plessis kept his side afloat as he smacked nine fours and two sixes to finish the powerplay on 70/2.

Following du Plessiss’s dismissal on the very first ball after the powerplay, the rest of the JSK batters underwent a dreadful collapse as Neesham struck three wickets in his two overs between the 7th and 9th over, including the skippers’.

Nortje packed three batters while Rashid Khan also took two wickets when JSK lost hold of the game and lost the last eight wickets for the addition of mere 52 runs.