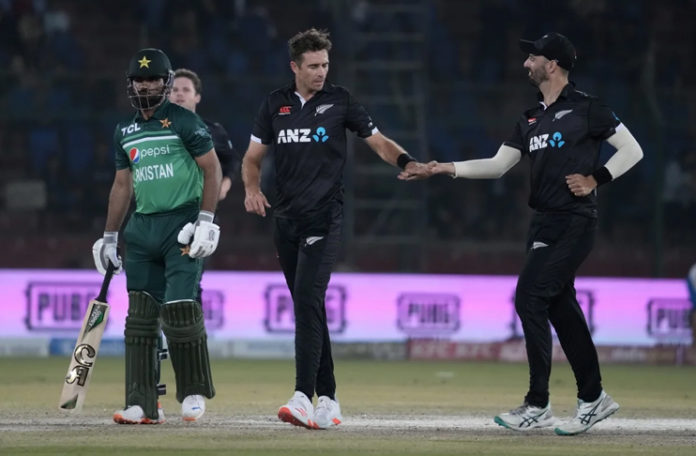 KARACHI: New Zealand bowlers displayed a combined effort to bundle out Pakistan for a mere 182 and sealed a dominating series-levelling victory in the second ODI.

Set to chase 262, Pakistan’s batting lineup failed completely and could amass 182 runs despite a fighting 79-run knock from skipper Babar Azam and thus, handed a dominating victory to the touring side.

The hosts had a poor start to their 262-run pursuit as they lost both their openers – Imam-ul-Haq and Fakhar Zaman – for just nine runs.

Following the slump, skipper Babar and wicketkeeper-batter Mohammad Rizwan tried to anchor the run chase as they stitched a cautious partnership.

The duo added 55 runs for the second-wicket stand but remained too slow in the process as they conceded 99 deliveries.

New Zealand finally found their third breakthrough in the 20th over when Mitchell Santner castled Rizwan with a perfect off-spinner. The right-handed batter could score 28 runs off 50 deliveries.

Following Rizwan’s dismissal, Pakistan began to lose wickets at an alarming rate and soon slipped to 124/5 with Salman Ali Agha, who attempted to charge on the Kiwi bowlers departed after getting run out.

Besides Agha, none of the batters could stay for long at the crease and offered a helping hand to Babar, who saw his side slipping further to 173/8 in the 42nd over.

The top-ranked ODI batter then also perished in the next over after getting stumped off Ish Sodhi. He remained the top-scorer for his side with a fighting 79-run knock in 114 deliveries with the help of eight boundaries and a six.

Sodhi then struck again on the last delivery of his over to power his side to a thumping 79-run victory over Pakistan as New Zealand levelled the three-match series 1-1.

Southee and Sodhi bagged two wickets each, while Michael Bracewell, Santner, Glenn Phillips and Ferguson struck out a batter each.

New Zealand, batting first after winning the toss, could only manage to amass 261 despite an astonishing second-wicket partnership between skipper Kane Williamson and Devon Conway with the latter scoring a century.

The touring side had an unwanted start to their innings as they lost their opener Finn Allen in the first over off Naseem Shah.

Following the early slump, skipper Williamson and opener Conway attempted to anchor the innings with a gritty second-wicket partnership as they added 181 runs at a decent pace.

Amid the second-wicket stand, New Zealand were eyeing to amass the 300-run mark but Naseem struck in the 30th over to remove Conway briefly after the latter’s century and broke the vital partnership.

Conway top-scored for New Zealand with 101 off 92 deliveries, laced with 13 boundaries and a six.

Following the much-needed breakthrough, Babar Azam’s move to bring spin paid off as Mohammad Nawaz pushed the touring side to the backfoot with back-to-back strikes in the 33rd over.

New Zealand then endured another major setback in the form of Williamson, who walked back after scoring an anchoring 82 off 100 balls with the help of 10 boundaries.

Following his dismissal, New Zealand lost wickets at an alarming rate, which halted their expedition towards a big total as eight of their batters could not amass double digits.

Besides Conway and Williamson, Santner remained the other notable run-getter as he offered a fightback with his gritty 37 off 40 deliveries before getting run out in the last over.

Nawaz led the bowling attack for Pakistan with 4/38, while Naseem claimed three wickets. Usama Mir and Haris Rauf, on the other hand, made one scalp each.