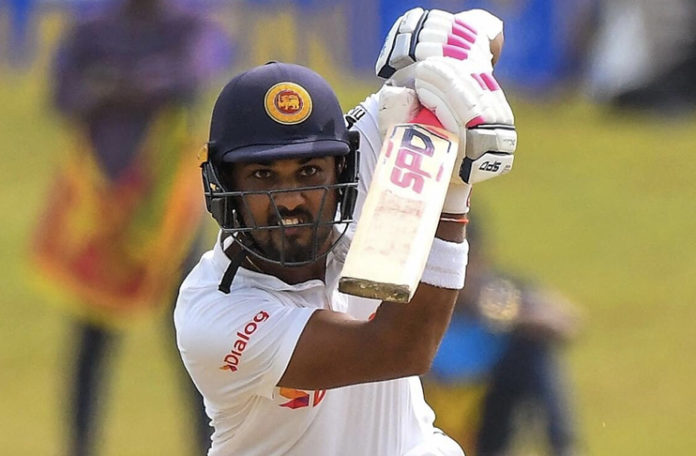 GALLE: Dinesh Chandimal starred with an astounding 80-run knock as Sri Lankan batters charged Pakistan to raise 315 runs for the loss of six wickets at stumps on the opening day of the second Test, here on Sunday.

Wicket-keeper batter Niroshan Dickwella played a late cameo scoring an unbeaten 42 off 43 balls, while opener Oshada Fernando set the tone for Sri Lanka’s batting attack with a brilliant half-century at the top.

Veteran all-rounder Angelo Mathews, however, was dropped on 36 by Pakistan captain Babar Azam in the covers but remained unable to capitalise on the opportunity as left-arm spinner Nauman Ali forced his way to the pavilion on 42 runs.

Opting to bat first after winning the toss,  Fernando and the skipper Dimuth Kurnaratne built a solid opening partnership of 92 runs before Mohammad Nawaz had the initial breakthrough for Pakistan.

The left-arm spinner dismissed Fernando in the 21st over after the right-handed batter completed his half-century.

Sri Lanka lost their second wicket just before Lunch as fielder Agha Salman run out Kusal Mendis on the non-striker end, dismissing him early for a mere 3 runs.

Skipper Kuranatane, however, fell prey to leg-spinner Yasir Shah on 40 as he mistimed a reverse sweep shot and was caught by the point fielder.

Sri Lanka’s middle order dominated Pakistan in the last two sessions as Chandimal and Mathews thumped a solid 85-run partnership before the latter’s departure on a 195-run total.

Chandimal, on the other hand, remained firm and built another 55-run partnership with Dhanajaya De Silva before he offered his wicket to Nawaz while trying to charge him. His magnificent knock included nine fours and two sixes.

De Silva made 33 runs before he was bowled out by pacer Naseem Shah.

For Pakistan, Nawaz grabbed two wickets while Yasir, Nauman and Naseem each made a scalp.

Sri Lanka will resume their first inning on the second day with the overnight pair of Dickwella and night watchman Dunith Wellalage on the crease.

It is worth mentioning here that Pakistan beat Sri Lanka in the first Test by four wickets after a historic run-chase to go one up in the series.