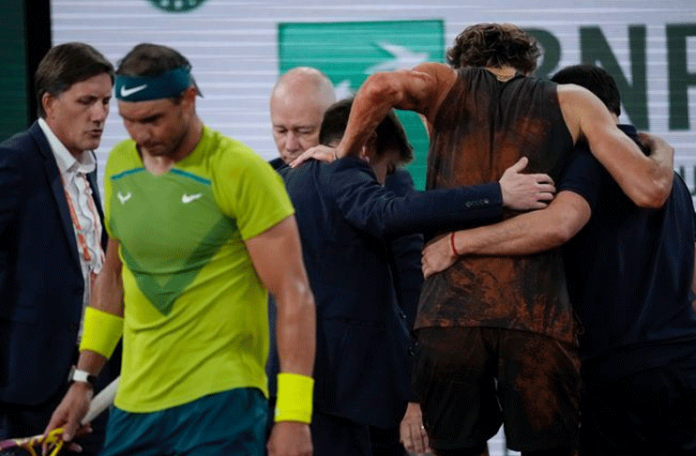 PARIS: The Spaniard Rafael Nadal has qualified for his 14th French Open final in a dramatic way as his German opponent Alexander Zverev retired hurt after sustaining a serious ankle injury.

An epic semi-final clash between the World No.5 Nadal and the third seed Zverev, was cut short 7-6(8), 6-6 as the latter has to retire after rolling his ankle while moving to his right, tracking down a Nadal forehand deep behind the baseline.

The German had to leave the court in a wheelchair, which resulted in Nadal reaching his 14th final of the Grand Slam. The Spaniard is now just one win away from lifting a record-extending 22nd Grand Slam trophy.

In a hard-fought clash, Nadal rallied from a break down and forced the set into a tie-breaker before going on to claim the first set after displaying great determination and skills in a mammoth one hour and 31 minutes.

The Spaniard, again showed his class in the second set, rallying from 3-5 to force what would have been another tie-break. Zverev’s injury, however, caused an early end of the match – which was on course for being the best match of the season.

Zverev’s heartbreak in the all-important semi-final has also halted his chances of rising to No.1 in the ATP Rankings by winning his first grand slam.

Nadal, on the other hand, will face either Casper Ruud or Marin Cilic in the French Open final and a victory in the final will result in the Spaniard becoming the oldest champion by eclipsing Andres Gimeno.