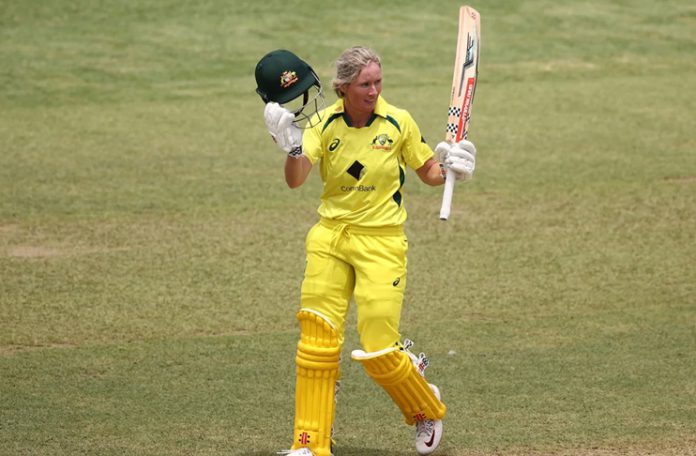 SYDNEY: Australian opener Beth Mooney struck a magnificent century to aid in her side’s dominant 101-run victory over Pakistan in the third ODI as they swept the ODI series 3-0 on Saturday.

Put into bat first, Australia piled up a mammoth 336/9 in their allotted 50 overs at the back of a terrific century by Mooney.

Australia had a contrasting start to their innings as they lost their young opener Phoebe Litchfield (9) cheaply for just 19 in the eighth over.

Mooney, however, then settled things down for Australia by stitching a gritty 160-run partnership with skipper Meg Lanning, who struck 72 off 70 deliveries.

The wicketkeeper batter then added another vital partnership with Ellyse Perry (15) before Nida Dar brought an end to her splendid knock.

She top-scored for her side with 133 off just 105 deliveries, hitting 14 boundaries and four sixes.

Fatima Sana was the pick of the bowlers for Pakistan with 3/53, while Diana Baig and Dar picked up two wickets each.

Set to chase 337, Pakistan could accumulate 235/7 in their set of overs as none of their batters could score big in the run chase.

Skipper Bismah Maroof top-scored for the touring side with 44 but was a touch too slow as she conceded 71 deliveries after openers Sadaf Shamas (30) and Sidra Ameen (34) provided a cautious start.

Despite their batters chipping with some contributions, Pakistan fell 101 runs short of victory due to a defensive approach.