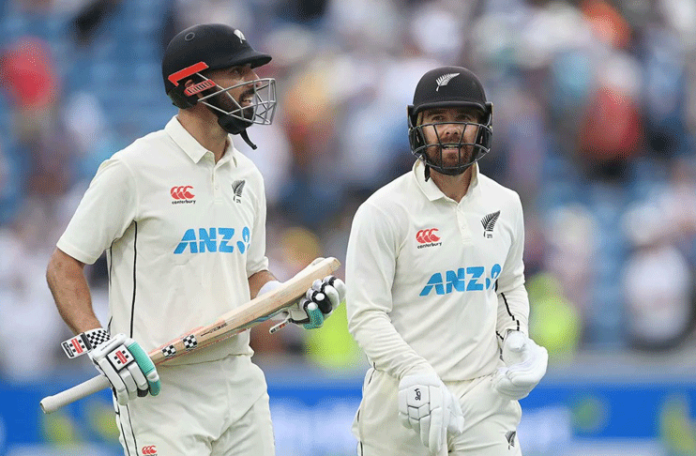 LEEDS: New Zealand’s reliable pair of Daryl Mitchell and Tom Blundell stood firm with their unbeaten fifth-wicket century-plus partnership as the touring side finished on 225/5 at the conclusion of the first day of the ongoing third Test.

At the Toss, the New Zealand captain Kane Williamson opted to bat first after the coin flipped in his favour in the third match of the series, led by the hosts 2-0.

Batting first, the touring side sustained early trouble as they lost three wickets at an alarming rate with their returning captain Williamson also making his way back after scoring 31 off 64.

The left-handed opener Tom Latham was the first casualty for the side as he fell to veteran pacer Stuart Broad for a duck in the first over. His opening partner Will Young, on the other hand, could only manage to score 20 to his name before England spinner Jack Leach trapped him in his legs.

The pair of Devon Conway and Henry Nicholls then attempted to anchor the innings for the touring side but could only add 21 runs to the team’s total before England’s debutant Jamie Overton castled the latter to claim his first Test wicket. Conway scored 26 off 62 balls with the help of five boundaries.

What a moment 👏 A first Test wicket for @JamieOverton 🙌

With the side struggling to get going at 83/4, Nicholls, who was looking to keep his end tight put on a valuable 40-run partnership with Mitchell before losing his wicket in an unusual way as his straight drive took off from the middle of Mitchell’s bat and went straight to the fielder at mid-off. The bizarre dismissal put an end to Nicholls’ gritty knock of 19 runs, for which he faced 99 balls.

The pair of Mitchell and Blundell seemed to remain unaffected by the bizarre dismissal of Nicholls as they went on to neutralise the threat by the strong English bowling attack and remained unbeaten till the conclusion of the opening day.

New Zealand’s top-scorer of the ongoing series Mitchell starred again as he remained unbeaten with his astonishing 78 off 159 balls, laced with six boundaries and two sixes. Blundell, on the other hand, is five short of his half-century.

The duo will now resume the proceedings for the touring side on 225/5 on the second day of the third Test, while the English bowlers will be looking to break their partnership.

READ: Wasim Akram reveals how he would have bowled to Virat Kohli