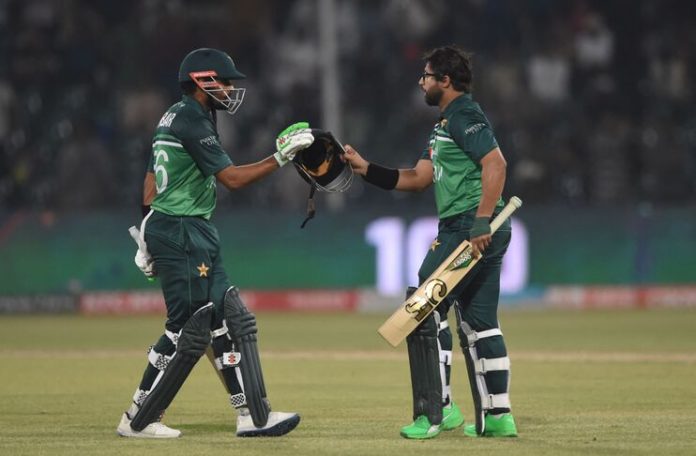 Set to chase 349, Pakistan steered to the total comfortably in 49 overs, thanks to the centuries from Babar and Imam.

In the run chase, Pakistani opener Fakhar Zaman and Imam laid a solid foundation for the run chase with a magnificent 118-runs opening stand.

Fakhar fell in the 19th over after scoring 67 off 64 balls, laced with seven boundaries and two sixes, while Imam kept going and went on to smash his second consecutive ODI hundred.

Imam, however, fell briefly after reaching his century, he scored 106 off 97 balls; including six boundaries and three sixes. The left-handed opener also put on a valiant 111-runs partnership with Babar, who top-scored for the side with an astonishing 114 off 83 deliveries, laced with 11 boundaries and a six.

Wicket-keeper batter Mohammad Rizwan and the left-handed batter Khushdil Shah also chipped in as the former scored 23, while the latter remained unbeaten with 27.

For Australia, Adam Zampa took two wickets, while Marcus Stoinis and Nathan Ellis made one scalp each.

After being put in to bat by the Pakistani skipper Babar, the touring side was off to a poor start as the left-arm pacer Shaheen Shah Afridi removed the Aussie skipper Aaron Finch for a golden duck in the first over.

Australia’s top-order batter Ben McDermott, alongside Travis Head, then anchored the innings and added 162 runs for the second wicket. The pair appeared solid as both scored half-centuries but Head could not manage to convert it into another century as he fell 11 short of his second consecutive century.

The left-handed opener scored 89 off 70 balls with the help of six boundaries and five sixes. McDermott, on the other hand, kept going and went on to smash his maiden ODI century.

The right-handed batter put on an important 64-runs partnership with Labuschagne before making his way back to the pavilion. He top-scored for the side with 104 off 108 deliveries, laced with 10 boundaries and four sixes. Labuschagne, on the other hand, perished in the 41st over after scoring 59.

Following his departure, the right-handed all-rounder Marcus Stoinis and Sean Abbott also chipped in with 49 and 28 respectively to take their side to 348/8 in 50 overs.

For Pakistan, Shaheen led the way with four wickets, while Mohammad Wasim Jr picked two. Zahid Mahmood and Khushdil Shah, on the other hand, made one scalp each.