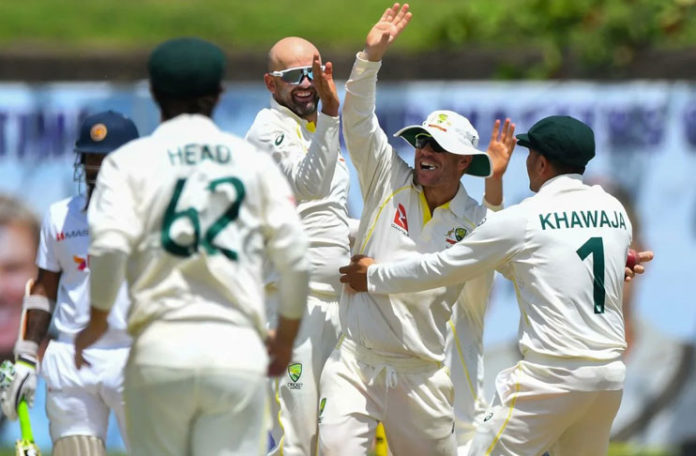 GALLE: Australia’s off-spinner Nathan Lyon enjoyed a magnificent outing as he bagged an economical five-fer before the left-handed opener Usman Khawaja gave touring side a solid foundation on the opening day of the first Test against Sri Lanka.

After opting to bat first, the home side could only manage to score 212 despite a brilliant fifty from the wicket-keeper batter Niroshan Dickwella as the Australian spin attack undone his efforts to give their side an upper hand.

The hosts kept losing wickets at a regular interval and none of their batters besides Angello Mathews and Dickwella could resist much and fell short against the strong Australian bowling attack.

Dickwella top-scored for his side with a quick 58 off 59 balls, laced with six boundaries but he too could not take his side out of danger as Lyon struck for his fourth to end his astonishing knock. Matthews, on the other hand, was the notable run-getter as he scored 39 off 71.

For Australia, Lyon bagged five while Mitchell Swepson claimed three. The pacers Pat Cummins and Mitchell Starc made one scalp each.

In response to Sri Lanka’s 212, the Australian openers David Warner and Usman Khawaja provided a solid foundation to the side as they put on a decent 47 runs for the first wicket.

Warner, who was scoring at a rapid pace, however, fell in the 10th over as Ramesh Mendis trapped the left-hander in his legs for 25. He faced 24 deliveries and smashed five boundaries.

The touring side then suffered a brief collapse as they slipped from 47-0 to 83-3 in exactly 10 overs. Khawaja, on the other hand, held his ground firm and kept the scoreboard ticking till the conclusion of the first day, whereas, Marnus Labuschagne and Steve Smith perished cheaply amid the collapse.

Khawaja, who is three short of his half-century, will now resume the proceedings for Australia at 98/3 along with his counterpart Travis Head (6) on the second day of the ongoing Test.

Mendis with his two wickets remained the only Sri Lankan bowler to have opened his account on the first day.