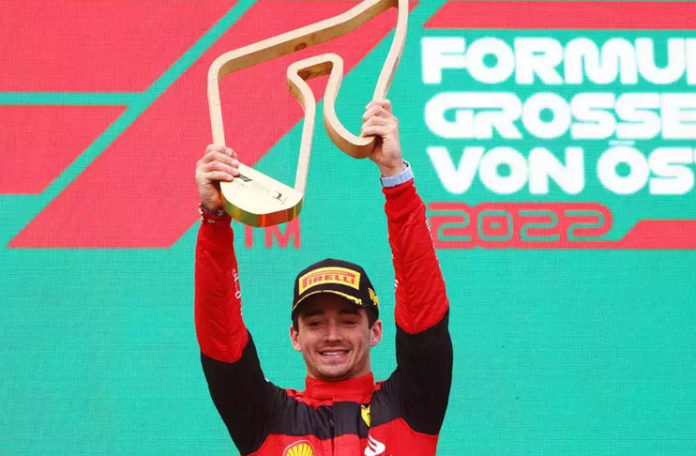 SPIELBERG: Ferrari’s Charles Leclerc avoided a late-race scare as he held his nerve calm to overcome Red Bull’s Max Verstappen to win the Austrian Grand Prix 2022 and ended his dismal run in the season.

Leclerc, who dominated the majority of the sprint, found a late halt in his triumph as his throttle pedal started to stick, made downshifts difficult and allowed Verstappen to close to within 2.3 seconds.

The Ferrari driver, however, held his nerve calm in the late-race scare and won his first sprint after Round 3 at Melbourne. Whereas, Verstappen missed out on his third straight race despite claiming the pole here.

Another Ferrari driver Carlos Sainz, who was challenging Verstappen for the second spot and was right on the former’s tail, had an unpleasant end to his race as the fire at the rear of his Ferrari signalled the end of his race.

Mercedes’s Lewis Hamilton benefitted the most from Sainz’s retirement as the former champion who had battled from P8 to P4, earned a final podium berth.

Hamilton’s teammate George Russell was a distant fourth despite starting there as he lost time in his first pit stop and also a five-second penalty tacked on as he collided with Red Bull’s Sergio Perez early on.

Following a much-needed victory, Leclerc has cut Verstappen’s championship lead by 38 points. Sainz, on the other hand, moved eight points away from the third-ranked Sergio Perez.

Exactly halfway through the season, here's how things stand#F1 pic.twitter.com/C3aWax29NE