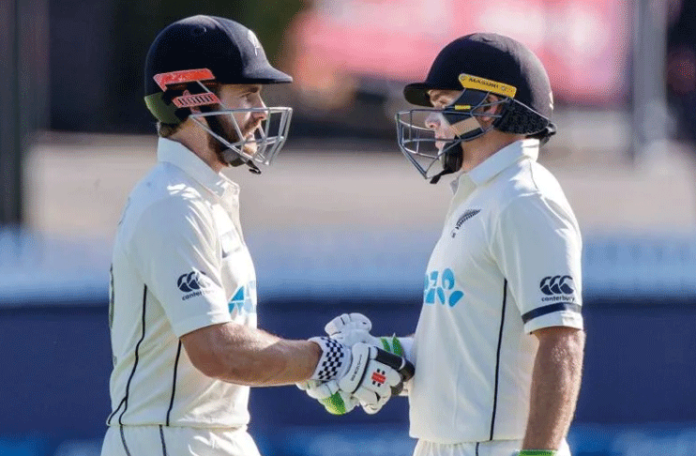 LEEDS: New Zealand opener Tom Latham and skipper Kane Williamson starred with the bat before England bowlers shook the middle order to restrict the Kiwis to 168 for the loss of five wickets on the third day of the Leeds Test.

England resumed the proceeding of the third day with an edge over opponents as Jonny Bairstow and debutant Jamie Overton had thrashed the Kiwi bowlers a day earlier but the Kiwis managed to bundle the hosts out on 360 in the first session.

Kiwi pacer Trent Boult upset all-rounder Overton depriving him of his maiden Test hundred as he walked back to the pavilion on 97. Stuart Broad and Bairstow continued to dominate the Kiwi bolwers and combined excellently for 55 runs before Broad was bowled out by Boult on 42.

Last match’s hero for England, Bairstow continued with his sublime form as he topped the scorecard for his side. He blasted 167 runs with an impressive strike rate of above 100, laced with 24 boundaries.

Boult starred with the bowl for his side, grabbing four crucial wickets followed by Tim Southee, who bagged three wickets. Neil Wagner took two while Michael Bracewell made one scalp.

New Zealand, on the other hand, raised a solid start to their second inning as the pair of  Latham and Williamson put England bowlers at unease. The duo put up a strong partnership of 97 runs after their side lost its first wicket on 28.

Debutant Overton was able to derail the partnership as he dismissed Latham on 72, openings the flood gates for the Kiwis. England bowlers dominated the final session as they stormed through New Zealand’s middle order and took four back-to-back wickets to tighten their grip on the match.

Skipper Williamson, who missed the last match after testing positive for Covid-19, failed to take complete advantage after he gained the momentum. He was dismissed by Mathew Pope, two runs short of a half-century.

New Zealand will resume the play on the fourth from 168/5 with all-rounder Dary Mitchell and wicket-keeper Tom Blundell on the crease.

It is worth mentioning here that England have an unassailable 2-0 lead in the three-match Test series against New Zealand.