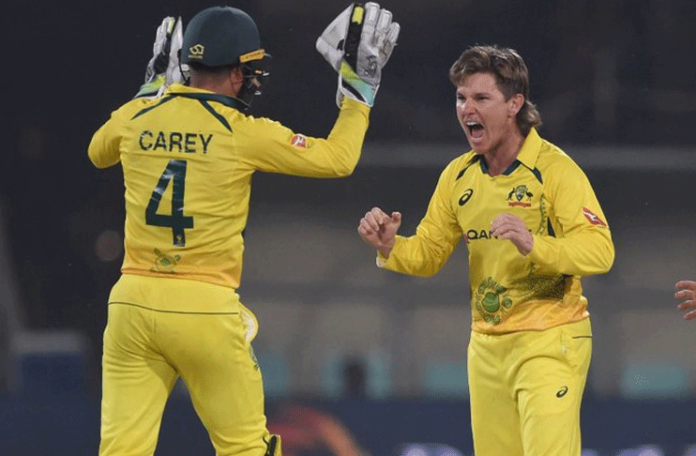 LAHORE: Pakistan’s left-handed opener Imam-ul-Haq’s century went in vain as Australia have defeated the home side by 88 runs in the first ODI of the three-match series, here at Gaddafi Stadium.

Set to chase 314, Pakistan could only manage to score 225 before being bowled out in the 46th over despite the century from Imam.

Pakistan had a poor start to the run chase as the home side lost their first wicket for 24. The left-handed opener Fakhar Zaman made his way back after scoring a run-a-ball 18.

Another left-handed opener Imam alongside Babar Azam anchored the innings with a valiant 96-runs partnership for the second wicket. The duo was batting sensibly as both scored half-centuries before Babar perished in the 25th over.

The Pakistani skipper scored 57 off 72 balls with the help of six boundaries, while Imam kept the scoreboard ticking single-handedly when the home side was losing wickets at an alarming rate.

The left-handed opener then went on to score his ODI hundred but could not extend his century knock for long as the debutant Nathan Ellis castled him for 103. He faced 96 balls and smashed nine boundaries including three sixes.

The rest of the Pakistani batters could not contribute in the run chase and as a result, the home side was bowled out on 225; handing a comprehensive 88-runs victory to Australia.

For Australia, Adam Zampa led the bowling chart with four wickets, while Mitchell Swepson and Travis Head took two each. Sean Abbott and Ellis, on the other hand, struck out a batter each.

Australia, after being put in to bat first by the Pakistan captain Babar, managed to amass a decent total of 313/7 in the allotted 50 overs. The touring side, however, lost their way in the middle of the innings despite having a fine start.

Coming out to bat first, the Australian openers Aaron Finch and Head provided a solid start to the side and put on a magnificent century-plus partnership for the first wicket.

Australian captain Finch, who was struggling to get going, made his way back in the 15th over as the debutant Zahid Mehmood dismissed him for 23. The right-handed opener faced 36 balls and hit only one six.

His opening partner, Head, on the other hand, kept the scoreboard ticking and went on to score his second ODI century off just 70 balls. The left-handed batter, however, fell briefly after reaching the milestone as he lost his wicket to Iftikhar Ahmed after attempting to slog the ball over the long-off boundary.

The left-handed opener top-scored with 101 off 72 balls with the help of 12 boundaries and three sixes. The right-handed batter Ben McDermott, on the other hand, also chipped in with his half-century. He followed back with a brilliant knock of 55 off 70 deliveries, laced with four boundaries.

Following his dismissal, the touring side began to lose wickets at an alarming rate and as a result, restricted to 313/7 in the 50 overs. Australia’s all-rounder Cameron Green contributed with his unbeaten 40 at the death.

For Pakistan, Haris Rauf and Zahid led the way with two wickets each, while Iftikhar and Khushdil Shah made one scalp each.