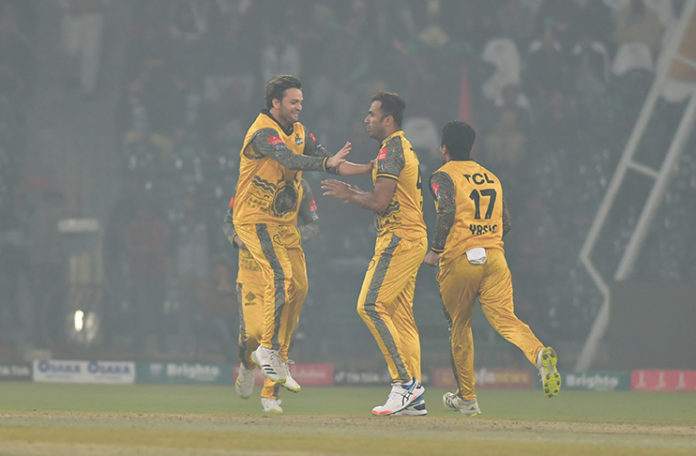 LAHORE: Peshawar Zalmi’s skipper – Wahab Riaz held his nerve calm to dismiss the hero of Islamabad United Azam Khan in the 19th over; assisting his side to beat the latter by 10 runs in the 24th match of the Pakistan Super League (PSL) season 7.

Set to chase 207, the United was peaking until the 19th over as the Zalmi skipper took the all-important wicket of Azam to turn the fortune in his side’s favour.

Came out to chase a mammoth, the United opener – Rahmanullah Gurbaz provided an astonishing start to his side. He scored a quickfire 46 off 19 balls with the help of five sixes and three boundaries.

His opening partner Mubasir Khan, however, contrasting but anchored innings as the side lost quick wickets as the number three batter Danish Aziz bagged a duck.

Mubasir too soon departed in the ninth over after scoring 21; causing his side to slip to 89-3. Following his dismissal, Azam stood up for his team and sailed the ball around the park.

The right-handed explosive batter appeared determined of guiding his side to the finishing but faltered in the 19th over; handing an easy catch to Ben Cutting at long-on boundary off Wahab’s length delivery.

The young batter smashed a terrific 85 off 45 balls, laced with six boundaries and seven sixes. The rest of the United batters, on the other hand, could not manage to contribute significantly and as a result, the side fell short of 10 runs; scoring 196/7 in the allotted overs.

For Zalmi, Salman Irshad bagged three wickets, while Wahab claimed two. Hussain Talat and Cutting, on the other hand, made one scalp each.

After opting to bat first, Zalmi’s opener – Mohammad Haris put on a show with his blistering knock. The young batter provided a flying start to his side; scoring his half-century off just 18 balls.

Haris’ heroics helped Zalmi amass the hundred in just eighth over. His opening partner from Afghanistan – Hazratullah Zazai, however, remained off-colour as he managed to score 13 on 12 balls.

Haris, on the other hand, stood firm and kept ticking the scoreboard. He scored a quickfire 70 off just 32 balls with the help of seven boundaries and five sixes before walking back to the pavilion in the 10th over.

Following his departure, the veteran Shoaib Malik and Yasir Khan scored crucial runs for the team. Yasir scored a quick 35 off 24 balls, while Malik’s astonishing 38-runs knock came for just 23 balls. The veteran smashed two boundaries and as many sixes in the course of his brilliant inning.

With their departure, the side then began to lose wickets at a consistent rate and in the end, was restricted to 206/8 in the allotted 20 overs.

Following this victory, the Zalmi has now overtaken the United at the third position in the PSL 7 points table.