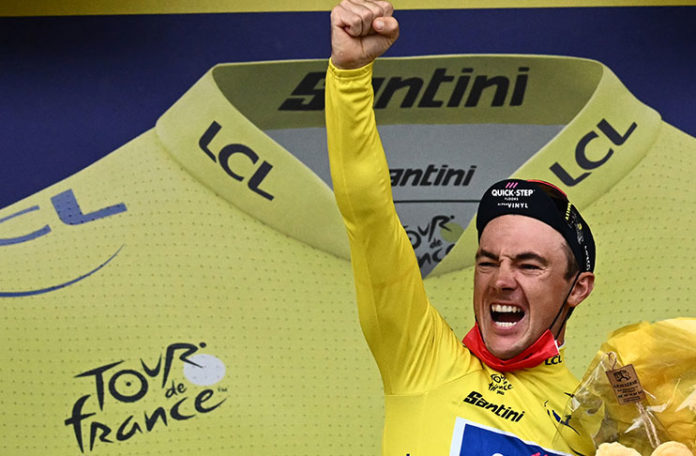 COPENHAGEN: Belgian Yves Lampaert shocked the favourites to pull on the leader’s yellow jersey after the rain-drenched first stage of the Tour de France, an individual time-trial here on Friday.

Quick-Step rider Lampaert suffered fewer thanks to a later start than the pre-race favourites on the slippery 13.2km route, finishing five seconds ahead of compatriot Wout van Aert, with defending champion Tadej Pogacar third-best seven seconds off the pace.

Massive crowds lined the streets as riders sped past the Little Mermaid statue, the harbour-front Blox building and the Amalienborg Palace, where Crown Prince Frederik joined the celebration.

Lampaert was overwhelmed with emotion as the 31-year-old realised he would wear the overall leader’s yellow jersey on Saturday’s second stage.

“I was hoping for a top ten, but not this,” said the 2021 Belgian time-trial champion.

“I beat the big guys. Somehow I managed to beat the best riders in the world. I’m just a farmer’s son from Belgium, so this is something I would have never dreamed of. My mind is exploding.

“I think I’ll only realise what I have done after the Tour when I’ll return to my family. I’m so happy with this victory and honoured to wear the yellow jersey.”

Two-time defending champion Pogacar pulled on the white jersey as the fastest under-25 rider.

“It’s great to be back on the Tour, the white jersey was my aim today,” said the Team UAE leader.

“I loved the crowds and my time was good for the GC (General Classification) against my rivals,” he said.

Dutch rider Mathieu van der Poel had set the early pace when the rain was at its heaviest.

His face creased in pain from the relentless effort and stress of the rain-slick road, van Aert then took the lead ahead of his arch-rival, world champion Filippo Ganna, who suffered a puncture along the way.