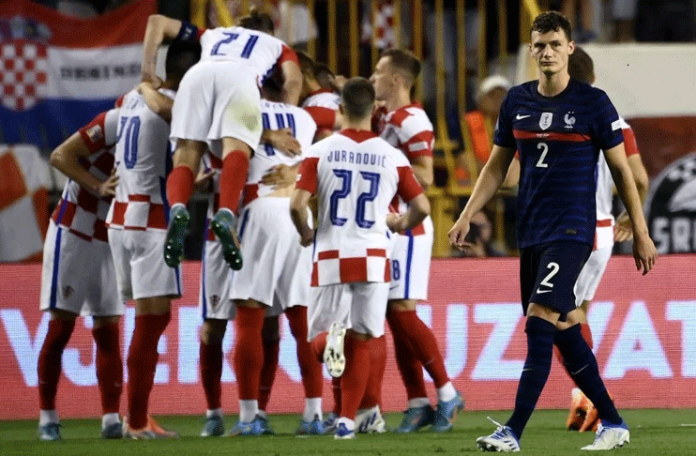 SPLIT: Croatian striker Andrej Kramaric netted the ball in a late penalty to make the reigning World Champions France wait for their first victory of the ongoing UEFA Nations League.

The reigning world champion France are still searching for their first triumph in the tournament as the side, once again witnessed the game slipping out of their hands in the closing minutes as the home side forced a 1-1 draw.

Following the team’s 1-3 defeat against Denmark, the manager Didier Deschamps made changes to the Playing XI with Aurelien Tchouameni the only player, who managed to keep his spot. Karim Benzema and Kylian Mbappe, on the other hand, also remained as the substitutes.

In the first half of the match, France received a number of chances as Christopher Nkunku saw a goal called back for offside. Moussa Diaby and Tchouameni also had a chance each but the Croatian goalkeeper Ante Budimir responded for the home side and made multiple saves for his side.

Despite having enormous firepower on the bench, France finally managed to make the scoreboard move in the 52nd minute as Adrien Rabiot’s left-footed strike dodged the Croatian goalkeeper Dominik Livakovic.

However, just like against Denmark, France lost their way in the match as Jonathan Clauss took Kramaric down in the penalty area and a quick VAR check resulted in the favour of the home side.

Kramaric, despite having the pressure of a second consecutive defeat for Croatia, kept his nerves calm and netted the ball comfortably to give both teams their first points in the tournament.