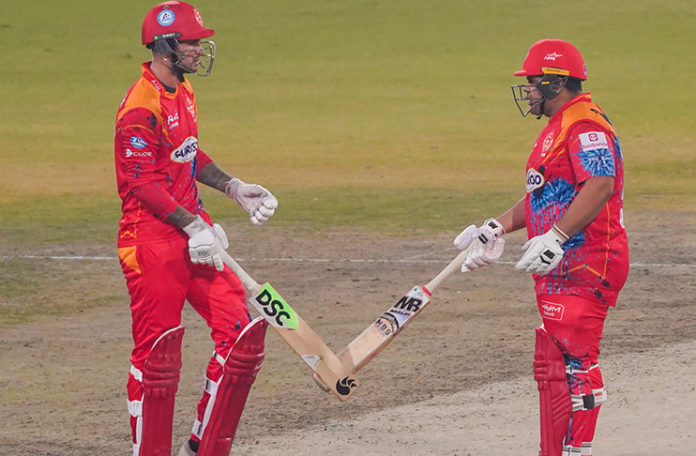 With a stunning victory, the United will now face Lahore Qalandars in the second eliminator tomorrow for the final berth.

Set to chase 170, United chased down the total with three balls to spare as Liam Dawson hit a six and a boundary to steer his side over the line after brilliant knocks of Alex Hales and Azam Khan.

Earlier, in the run chase, the United openers provided a fair start for the run chase as Will Jacks departed after managing to score 11. His partner Hales, on the other hand, stood firm and kept the scoreboard ticking alongside Shadab Khan.

The pair put on an important 34-runs partnership as the batters accelerated the innings with some big hits. Shadab departed earlier after scoring 22 off 17 balls; smashing one boundary and a six.

Hales then joined hands with the newly arrived Azam to proceed to score his half-century. He, however, could not continue for long as Salman Irshad yorked him for 62. He faced 49 balls and smoked six boundaries and three sixes.

Azam also played a crucial 28-runs knock before walking back to the pavilion in the final over. He faced 22 balls and smashed three boundaries including two sixes.

For the Zalmi, Salman bagged three wickets, while Khalid Usman and Benny Howell struck out a batter each.

After opting to bat first in the first qualifier, the Zalmi managed to post a commendable 169-5 in the allotted 20 overs, thanks to the fifties from their experienced batters Kamran Akmal and Shoaib Malik.

Coming out to bat, the Zalmi openers Mohammad Haris and Kamran failed to provide a flying start to the side as Faheem Ashraf managed to break the opening partnership for 30. Haris, who was looking firm perished after scoring 12.

His opening partner, Kamran however, stood firm and kept the scoreboard ticking single-handedly while the newly joined batter Yaris Khan walked back to the pavilion after scoring cheaply.

Kamran then put on an important 40-runs partnership with Malik and reached his half-century. He, however, could not continue for long as he departed after scoring 58 off 39 balls; smashing seven boundaries and two sixes.

Malik then put things under his control and accelerated the innings with the left-hander Hussain Talat. The pair put on a quick 56-runs partnership for the fourth wicket before Talat perished while attempting to scoop Hassan Ali’s full-length delivery; handing an easy catch to the short fine leg. He scored a quick 28 off 15 balls, laced with five boundaries.

Malik, on the other hand, carried his bat till the last over and scored a magnificent 55 off 43 balls. The veteran smashed four boundaries and two sixes in the course of his stunning knock.

Following the late power hitting, the Zalmi finished at 169-5 in the first innings; setting a 170-runs target for the United.

For the United, Hasan starred; taking three wickets, while Shadab and Faheem struck out a batter each.