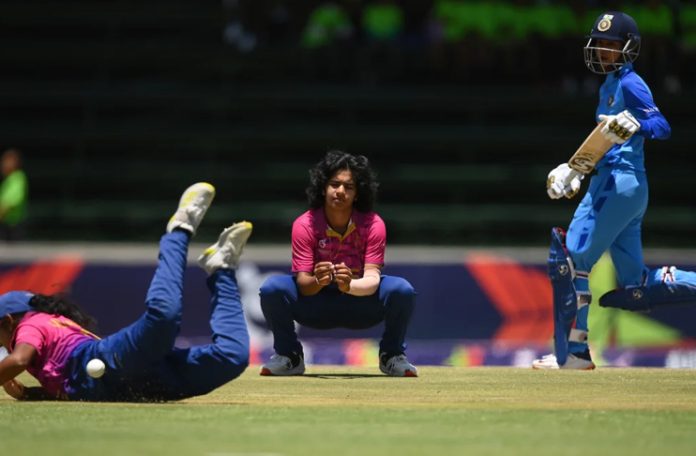 Shweta, who scored an unbeaten 92 against South Africa on Saturday, continued her exceptional form as she scored 74 not out against UAE and played a pivotal role in India’s second consecutive triumph in the group stage.

Put into bat first, India piled a mammoth 219/3 in their allotted 20 overs courtesy of a strong batting display by their top-three batters.

Batting first, Indian openers Shweta and skipper Shafali laid a solid foundation for a big total as they accumulated 111 runs in the ninth over.

Both batters took on the UAE bowlers with great dominance but Shafali was the core aggressor of their astonishing stand as she struck 78 off just 34 balls, hitting 12 boundaries and four sixes.

Following the skipper’s dismissal, wicketkeeper batter Richa Ghosh joined Shweta in the middle and made sure the side do not lose momentum as she added further to the misery of the UAE bowlers with her quickfire knock of 49 runs in just 29 balls before falling in the 19th over with India already amassing 200-run mark.

Meanwhile, Shweta remained unbeaten on 74 as India finished at 219/3. She faced 49 deliveries and struck 10 boundaries.

For UAE, Indhuja Nandakumar, Mahika Gaur and Samaira Dharnidharka struck out a batter each.

Set to chase a mammoth 220, the UAE batting lineup failed completely and could only manage to score 97/5 in 20 overs.

Opening batter Lavanya Keny (24) and Gaur (26) remained the only two notable run-getters while the rest seemed clueless against the strong Indian bowling attack.

Parshavi Chopra, Mannat Kashyap, Titas Sadhu and Shabnam MD made one scalp each for India.

In another Group D fixture, hosts South Africa thrashed Scotland by 44 runs to secure their maiden victory in the mega event.

Following the outcome of both fixtures, India continued to lead the group standings with four points, while South Africa surpassed UAE to secure the second spot with a better net run rate.