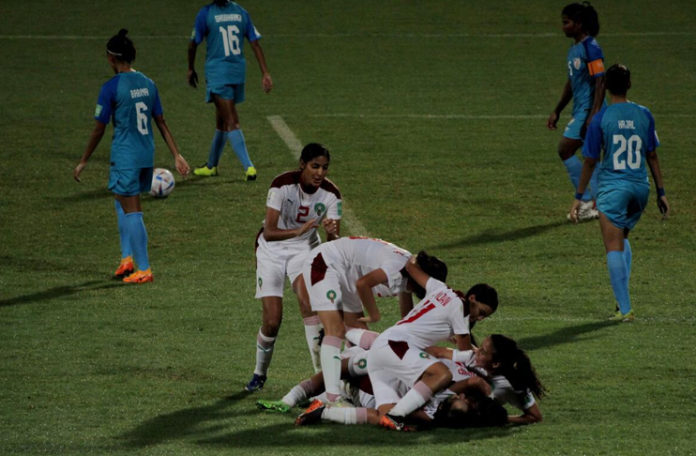 BHUBANESHWAR: Hosts India endured a second consecutive defeat in the ongoing FIFA U-17 Women’s World Cup as Morocco triumphed 3-0 to shatter the home side’s hopes in front of a silent crowd.

Coming out from a hammering 0-8 loss to the United States of America (USA), the girls in blue suffered another setback, which forced them to crash out of the mega event.

India displayed brilliant grit and did well in the first half to keep the scorecard intact as none of the sides was able to score a goal.

Morocco took the field in the second half with great dedication and soon got the reward in terms of a penalty after the ball struck Naketa’s arm.

Chanu then spilled the ball 10 minutes later, allowing Yasmine Zouhir to net a regulation goal to enhance her side’s lead to 2-0.

Djennah Cherif then received a brilliant pass in the stoppage time which she fired past Melody; rustling in the net.

Following two consecutive defeats, the hosts India crashed out of the mega event. The girls in blue will take on Brazil in their last group match on October 17.

Meanwhile, in the Group B fixture, Germany hammered Chile 6-0 to extend their domination and secured a quarter-final berth.

Jella Veit opened the scoring for her side in the 20th minute, while Alara Sehitler scored the second goal in the 24th. Mara Alber then struck the third goal in the 40th minute and put her side in utter command at the conclusion of the first half.

The side then continued their domination over Chile as Marie Steiner took just 10 minutes to net the goal in the second half and made it 4-0 for Germany, while Loreen Bender struck the fifth goal a couple of minutes later.

Laila Portella decimated the Chile defence in the stoppage time and dribbled past their defenders and goalkeeper to net a convincing goal, which marked the end of Germany’s one-sided show over Chile.