Home Other Sports Inam, other medalists receive warm reception on their return to the country
Facebook
Twitter
WhatsApp
Email
Telegram 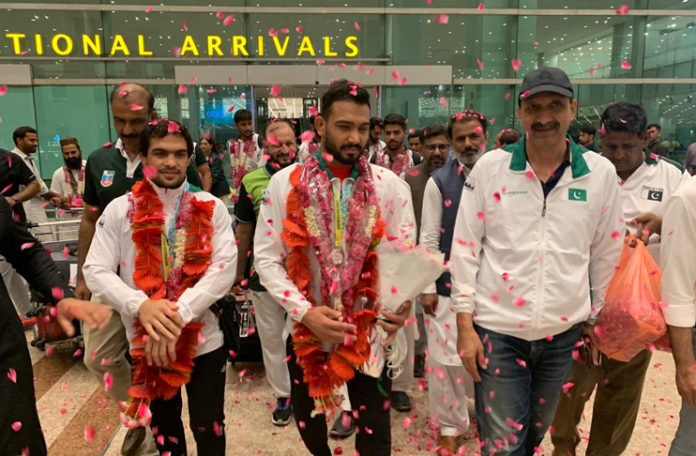 ISLAMABAD: Pakistani medalists who shone in the recently-concluded Commonwealth Games and Islamic Solidarity Games were given a warm reception on Monday at Islamabad Airport upon their return to the country.

Director General Pakistan Sports Board (PSB) Colonel (retd) Mohammad Asif Zaman welcomed the silver medalist of the Commonwealth Games Inam Butt and other top performers of the global event as they reached the country from the United Kingdom (UK).

Earlier DG PSB announced that a ceremony would be held in the honor of the athletes and present them with awards.

“We say welcome to our national heroes,” he said. “Gold medalists Arshad Nadeem and Muhammad Nooh Dastgir Butt as well as other medalists will also be given a warm welcome on their return to the country,” he continued.

It is pertinent to mention here that Pakistani athletes secured eight medals including two golds by weightlifter Nooh Butt and javelin thrower Arshad Nadeem in the recently-concluded Commonwealth Games 2022.

Whereas, Arshad also imitated alike performance in the Islamic Games as he claimed the gold by setting the Games record.