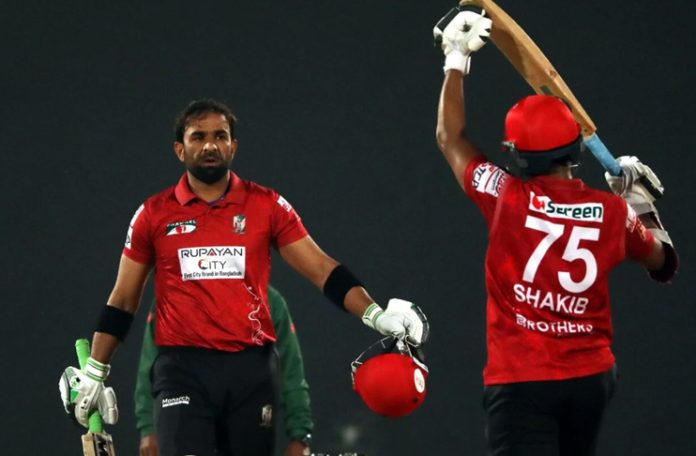 Put into batters, Fortune Barishal endured an early setback as they slipped to just 46/4 in the sixth over.

However, Iftikhar, coming out to bat at number six, turned the game on its head with his belligerent hitting and stitched an unbeaten record partnership with skipper Shakib Al Hassan.

The duo put on a record 192-run partnership for the fifth wicket and powered their side to a mammoth 238/4. Their unbeaten stand was the highest fifth-wicket partnership in the T20 format.

Iftikhar was the core aggressor of the game-changing fifth wicket stand as he struck a quickfire 100 off just 45 balls, hitting six boundaries and nine sixes.

Shakib, on the other hand, was also impressive as he scored 89 not out off just 43 balls and smashed nine boundaries and six sixes.

Young pacer Hasan Mahmud led the bowling attack for the Riders with 2/31 while Haris Rauf also picked two wickets but was expensive as he leaked 42 runs.

The Riders kept losing wickets at regular intervals amid the pursuit and none of their batters could go big.

Shamim (44) and Mohammad Nawaz (34) put on a brief fight amid their 57-run partnership for the seventh wicket but it was not enough.

Mehidy Hasan Mirza was the pick of the bowlers for Barishal as he picked 3/26, while Mohammad Wasim and Kamrul Islam claimed two wickets each.