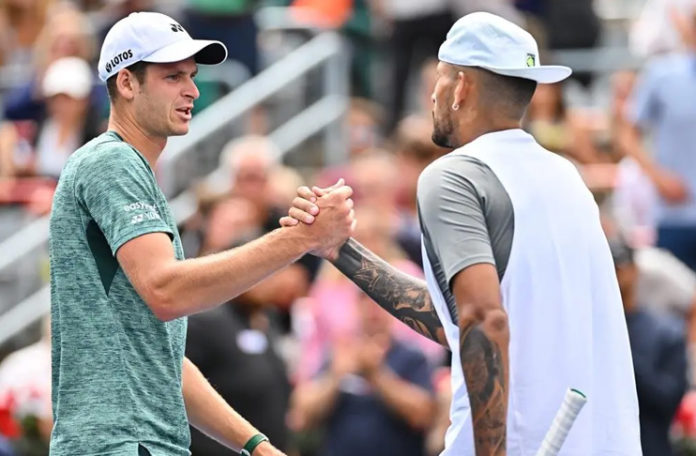 Ruud will play his third Masters semi-final this season on Saturday, having defeated Hurkacz in their previous meeting in May at Roland Garros.

At the bottom of the draw, Dan Evans completed a comeback to defeat American Tommy Paul 1-6, 6-3, 6-4, needing two match points to overcome Paul in two and a quarter hours.

But the chance of an all-British semi-final at this elite level fell away as Jack Draper lost 7-6 (7/4), 6-1 to Spain’s Pablo Carreno Busta after saving a pair of match points.

The 39th-ranked Evans, who managed only 15 winners, was decisively out-hit by Paul with 40.

Not surprisingly he said reaching his second career semi-final in the Masters tournament was a hard slog.

“I had to try and hang in, get a few scraps off of him,” he said. “If he made errors, take advantage, he was too good in the first set.

“You start to wonder if you can get into the match, so when I got the chance I took it to him. I was fired up – we had a good battle.”

For Hurkacz, it was the second win in as many matches against Kyrgios, the first played on grass in June at Halle, Germany.

Kyrgios, known for quick play, had several service games go by in less than one minute, with the Wimbledon finalist barely pausing between the end of one point and the start of the next.