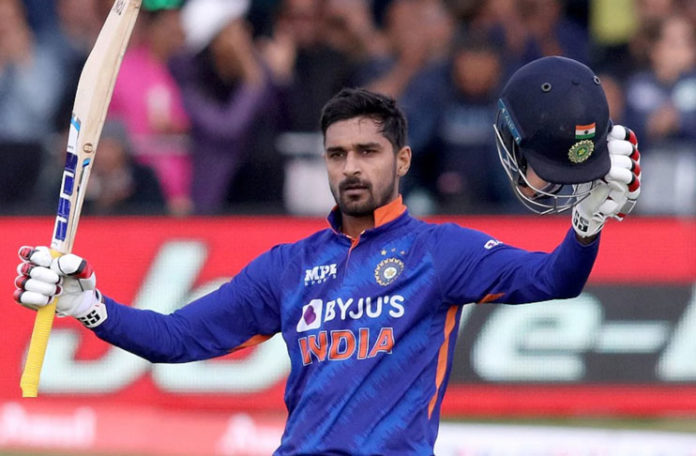 DERBY: Indian bowlers displayed brilliance before Deepak Hooda starred with a magnificent half-century in the run chase to power the touring side outclass Derbyshire by seven wickets in the Tour Match, here on Friday.

Set to chase a regulation 151, Indian batters displayed combined effort and amassed the total for the loss of three wickets with 20 balls to spare.

Hooda was the star of the day for India with the bat as his blistering half-century bolstered India to easily chase down the total. He scored a magnificent 59 off 37 balls, laced with five boundaries and two sixes.

Opening batter Sanju Samson earlier laid a solid foundation for the run chase as he scored a valiant 38 off 30 balls. Right-handed batter Suryakumar Yadav, on the other hand, also chipped in with quickfire 36 off 22 balls with the help of four boundaries and a six.

For Derbyshire, Ben Aitchison led the way with two wickets, while Mattie McKiernan could only make one scalp.

Batting first, the home side could only manage to pose 150/8 in the allotted 20 overs as the touring bowlers dominated their batters in most of the innings.

The home side was off to a dismal start as they lost two quick wickets for a mere 22 runs in the fourth with their inform captain from Pakistan, Shan Masood also making his way back after a struggling knock of eight off 11 deliveries.

The side then could not recover from the early horror and none of their batters could manage to score big and bolstered their side to a commendable total. Wayne Madsen top-scored for his side with his 28, while Hilton Cartwright followed back with 27.

For India, Arshdeep Singh and Umran Malik bagged two wickets each, while Axar Patel and Venkatesh Iyer struck out a batter apiece.