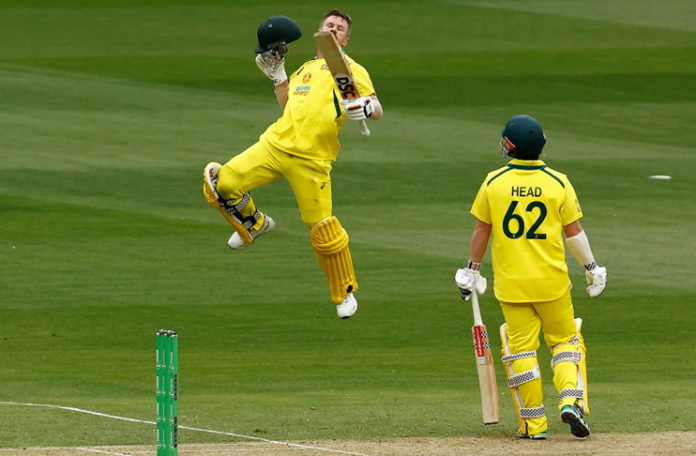 MELBOURNE: Australian openers David Warner and Travis Head scored magnificent centuries to power their side to thrash England by a hefty 221 runs in the third ODI to complete the clean sweep.

Australia, batting first on the invitation of England captain Jos Buttler amassed a mammoth 355/5 in their quota of 50 overs at the back of brilliant centuries from Head and Warner.

The openers provided a solid start to their side as they stitched 269 for the first wicket as both scored centuries.

England pacer Olly Stone then made twin strikes in the 39th over to hand England much-needed breakthroughs as he removed both Warner and Head.

Head, who was the core aggressor of the astounding opening stand fell after top-scoring for Australia as he accumulated 152 runs for 130 deliveries, laced with 16 boundaries and four sixes.

Warner, on the other hand, scored an anchoring 106 off 102 balls with the help of eight boundaries and two sixes.

Following their dismissals, the Australian middle order added 86 runs to the total in the remaining 11 overs with Mitchell Marsh being the notable run-getter among them as he scored a quick 30 off 16 deliveries.

Despite a bad day for the English bowlers, Stone was the pick for England as bagged four wickets but was expensive, while Liam Dawson managed to make one scalp.

England then had to chase a DLS-adjusted target of 364 runs in 48 overs after rain interruption and failed miserably in pursuit as they bundled out for a mere 142 in the 32nd over.

Hard-hitting opener Jason Roy showcased grit with his cautious 48-ball 33, while the rest of the batters failed to sparkle in the massive run chase.

Besides Roy, only James Vince was the other notable run-getter with his 45-ball 22.