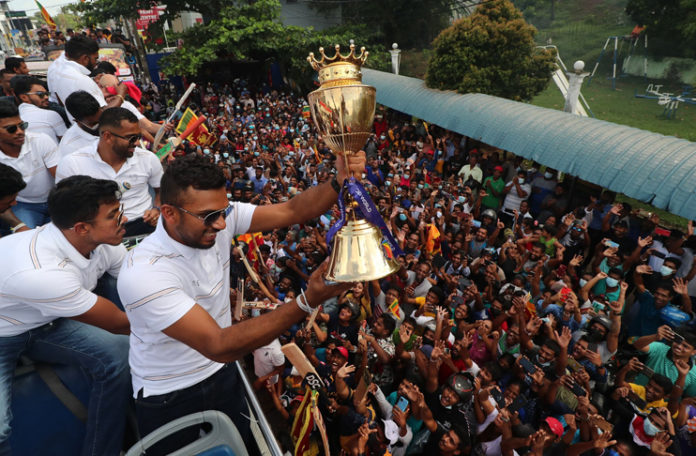 COLOMBO: Thousands of cricket fans gathered and flooded the streets on Tuesday to celebrate Sri Lanka’s Asia Cup win as the team went on a victory parade on an open-air bus after its return to the homeland.

Sri Lanka lifted their sixth Asia Cup title on Sunday after defeating Pakistan by 23 runs in the final thanks to an inspirational display of teamwork.

Taking to Twitter, Sri Lanka Cricket shared photos of the jubilant players travelling on a double-decker bus, with fans queued up on both sides of the roads cheering their cricket heroes.

📸 A grand welcome for the victorious Sri Lanka Team! #AsianChampions

The Sri Lankan cricket team arrived at Katunayake international airport, on the outskirts of the capital Colombo, early in the morning. From there to Colombo, the players received a warm welcome from the crowd lined up in a continuous chain, holding Sri Lankan flags and singing victory songs.

The Asia Cup triumph came amid the ongoing economic crisis in the country due to which the tournament had also been shifted from Sri Lanka to UAE.