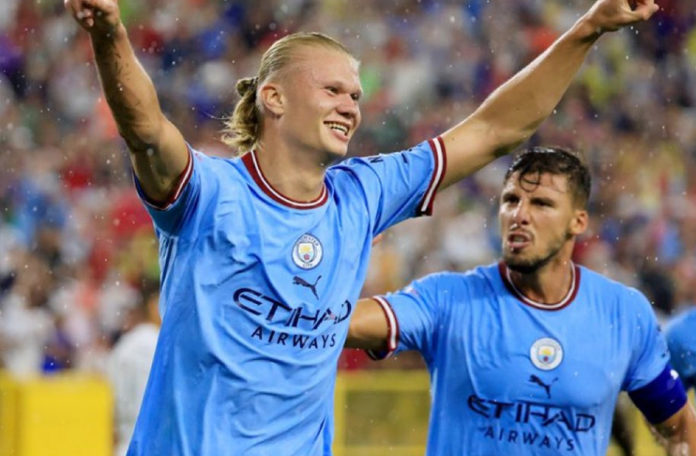 WISCONSIN: Erling Haaland impressed on his debut for Manchester City as his 12th-minute strike put his side ahead of the German giant Bayern Munich in a friendly match, here at Lambeau Field in Green Bay, USA.

The 22-year-old, who missed the first game of City’s US tour against Mexico’s Club America, soared on his first appearance in the sky blue jersey after he netted the ball from close range to score the lone goal of the game.

The match witnessed a delayed start for 15 minutes after a thunderstorm and following Haaland’s goal the play was suspended until further notice. Officials then reduced the game to 80 minutes.

The Norwegian star joined City for £51.2m from Borussia Dortmund in June this year.

“I’ve been watching a lot of City games in the last years, and in the last years it has been without a striker, so of course, I’ve been seeing myself in these situations today, so I’m not surprised,” said Haaland after the game.

Manchester City will now return to England, where they will face Liverpool in the Community Shield on Saturday at Leicester’s King Power Stadium.