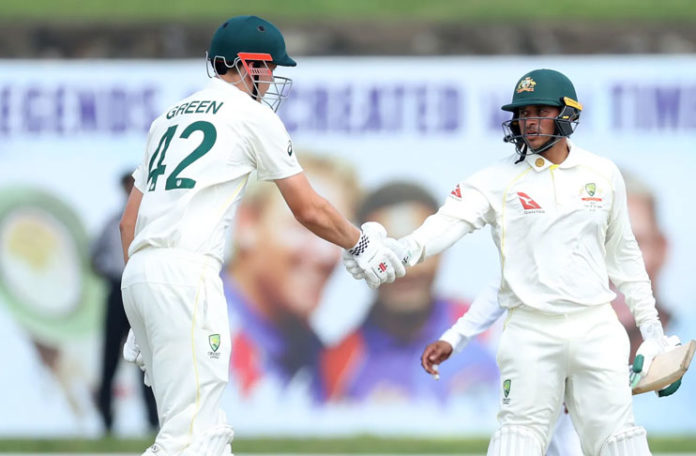 Khawaja then joined hands with Green and marched towards the total as the pair added a valiant 57 runs for the fifth wicket before the former made his way as he fell short to Jeffery Vandersay, who provided an important breakthrough to his side with his first wicket in the longest format.

Khawaja played a magnificent knock of 71 off 130 deliveries, laced with seven boundaries.

Following his departure, Green and wicket-keeper batter Alex Carey took the charge and piled 84 runs for the sixth wicket and bolstered Australia to take the lead.

The pair appeared solid with Green amassing his fourth Test century and Carey just five short of it before Ramesh Mendis trapped the latter to provide a glimmer of hope for the struggling hosts. The right-handed batter scored 45 off 47 balls with the help of six boundaries.

The touring side then lost two wickets at an alarming rate and slipped to 278/8 with Green and Mitchell Starc walking back to the pavilion in two consecutive overs respectively. Green remained the top scorer with 77 off 109 balls, laced with six boundaries, while Starc could only score 10.

The skipper Pat Cummins and Australia’s last day’s hero with the ball Nathan Lyon then added a crucial 35 runs till the conclusion of a rain-affected second day. Cummins (26) and Lyon (8) will now resume the proceedings for Australia at 313/8 on the third day.

Mendis was the pick of the bowlers for Sri Lanka following his four wickets, while Vandersay impressed with his two. Dhananjaya de Silva, on the other hand, made one scalp.