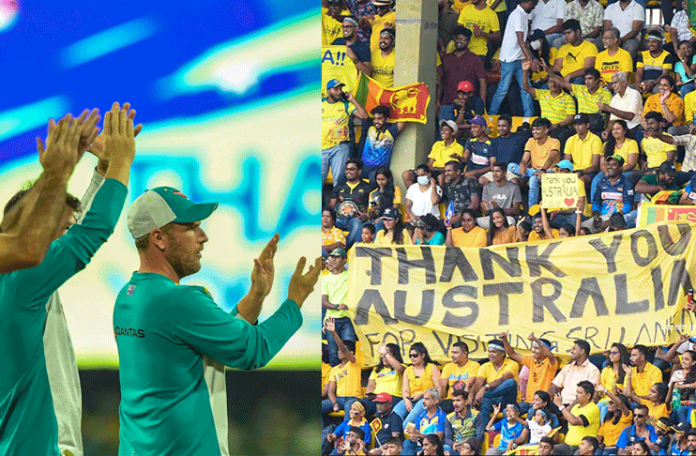 COLOMBO: Australia’s white-ball captain Aaron Finch thanked the Sri Lankan fans for their support and expressed his gratitude for touring the crisis-hit country in challenging times.

The Sri Lankan fans showed up in large numbers for the last match of the white-ball series between the two teams wearing yellow and gold to support the touring side, who won the fifth ODI to wrap up their white-ball tour. But the hosts prevailed 3-2 to win the series.

The Aussie players then also received a round of applause and standing ovation from the Sri Lankan fans after the conclusion of the fifth ODI. The Australian captain Finch, left amused by the electric environment and lauded the Sri Lankan fans for their support.

“We’re very grateful that we’ve been able to tour here. We know the difficulties that Sri Lanka has faced in recent times,” said Finch.

“Hopefully over these eight white-ball games we’ve been able to provide some joy to people in the country,” he maintained.

The skipper then went on to heap praises on the Sri Lankan fans and termed them, wonderful people and great supporters of cricket.

“It was outstanding, the Sri Lankan people are wonderful people,” Finch added. “The support that they provide is second to none. They are great cricket supporters, it’s not just constant noise, they ride the emotions of the game.

“When Sri Lanka are up and about, that’s as loud as anywhere you’ll visit in the world,” he concluded.

In a video shared by cricket.com.au, Australia all-rounder Glenn Maxwell, on the other hand, termed the moment as a pretty extraordinary feeling and revealed that he told his teammates that it was one of the most special feeling being able to walk around the ground and have a foreign country cheer for you.

The scenes in Colombo after the fifth ODI were unreal and left Glenn Maxwell and the Aussies stunned as fans thanked them for touring 🥰 #SLvAUS pic.twitter.com/Xugt5KVmyX

“A lot of times when Australia tours we are generally the enemy and [there are] not too many Australian fans in the stands. But to have the support and fans that are here at the moment is truly extraordinary,” Maxwell stated.

“Everyone’s wearing yellow. They’ve got all the Australian flags all over the place. It’s extremely special and it’s a credit to everyone that’s been able to get out here. It’s been such a tough time obviously for the locals. For them to come out and support us, hopefully, both teams can entertain them and they’ve had a really good time during the one-day series,” he concluded.