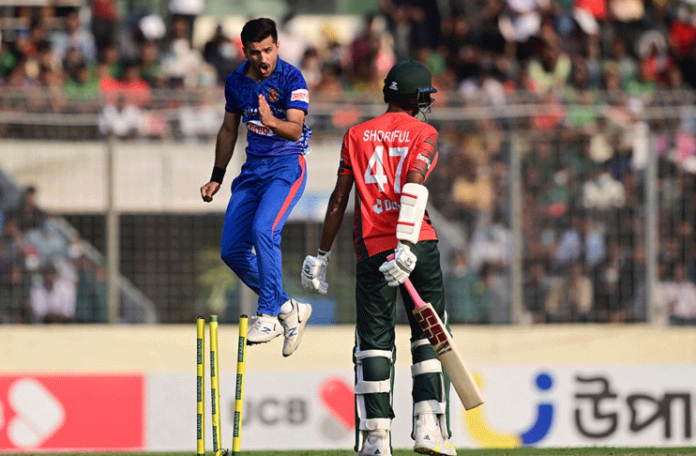 MIRPUR: Afghan batters Hazratullah Zazai and Usman Ghani played match-winning knocks after the bowlers wreaked havoc on Bangladesh’s batting line-up to help their side beat the hosts by eight wickets and level the series, here on Saturday.

Set to chase a paltry 116, Afghanistan managed to seal the victory in the 18th over despite an unwanted start as the touring side lost the opener Rahmanullah Gurbaz cheaply for four.

Zazai and Ghani then put on a solid 99-runs partnership for the second wicket and set the foundation of the victory. The pair appeared solid as both batters were scoring the runs swiftly before Ghani departed in the 16th over after scoring 47.

The right-handed batter, who missed his well-deserved half-century by a mere three runs, faced 48 deliveries; smashing five boundaries and a six.

His partner, Zazai, on the other hand, carried his bat till the end and scored a spectacular half-century. He scored an unbeaten 59 off just 45 balls with the help of three boundaries and five sixes.

For Bangladesh, Mahmudullah and Mahedi Hasan picked up a wicket each.

Batting first, Bangladesh’s batting line-up failed completely as the home side could only manage to score a mere 115/9 in the allotted 20 overs.

Mushfiqur Rahim, who was playing his 100th T20I, fought hard with his gritty knock of 30 runs, while the rest of the batters seemed clueless in front of the Afghan bowling attack.

For Afghanistan, Fazalhaq Farooqi and Azmatullah Omarzai led the way with three wickets each, while Rashid Khan and Mohammad Nabi struck out a batter each.