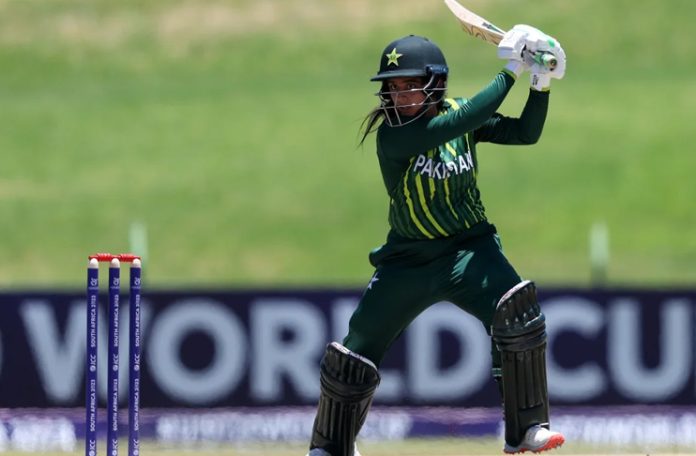 POTCHEFSTROOM: Eyman Fatima played a crucial knock of unbeaten 65 from 60 balls after lively fielding efforts put Pakistan on top as they beat Rwanda by eight wickets in their opening match of the ICC U19 Women’s T20 World Cup, here on Sunday.

The young Pakistani women’s side dominated the opponents with superb all-round performances on the field to reduce Rwanda to 106/8 in the allotted 20 overs.

Pakistan, however, reached the target with 13 balls to spare as Fatima and skipper Aroob Shah led the batting charge after the Green Shirts were once stuck at 36/2 in the 8th over.

Aroob made an unbeaten 20 runs from 21 balls while Fatima smashed 11 boundaries during her match-winning half-century.

Following an early scare in the first over when Areesha Noor Bhatti cleaned up Merveille Uwase in the first over, Ishimwe and Tuyizere tried to bring sanity before Pakistan triggered a batting collapse with three run outs and a wicket each to Zaib-un-Nisa, Anosha Nasir, Areesha and Aroob Shah.

With a cautious knock of 45-ball 40, Ishimwe top-scored for the side with seven of their batters failing to cross the double figures. Tuyizere, on the other hand, made 21 from 37 balls.

Pakistan will next play England on Tuesday before taking on Zimbabwe on Thursday.