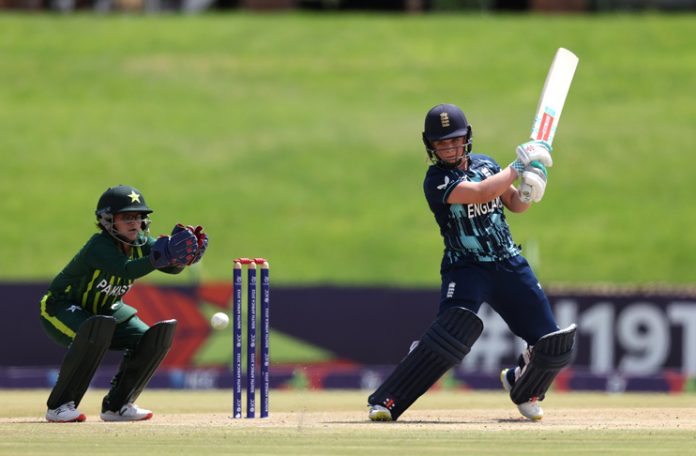 POTCHEFSTROOM: England batters Seren Smale and Ryana MacDonald-Gay played vital knocks to power their side to 156/7 before bowlers powered the side to a massive 53-run victory in the ongoing ICC U19 Women’s T20 World Cup.

After opting to bat first, England managed to pile up a competitive 156/7 at the back of brilliant knocks by Smale and MacDonald-Gay.

England, after getting off to a shaky start, lost wickets at regular intervals but that did not halt their march towards a big total, thanks to valuable contributions from their batters.

Opening batter and skipper Grace Scrivens laid a solid foundation with her 21-ball 24 before Smale anchored the innings with her sensible knock.

Smale top-scored for her side with 37 off 34 deliveries and hit six boundaries.

Despite Smale top-scoring, MacDonald remained the pick of the batters for England as she struck a quickfire 35 off just 22 balls, hitting three boundaries and a six.

For Pakistan, Anosha Nasir, Zaib-un-Nisa and Areesha Noor picked up two wickets each while Rida Aslam made one scalp.

Set to chase 157, Pakistan could only accumulate 103/5 in their set of overs with only opening batter Shawaal Zulfiqar and skipper Syeda Aroob Shah pushing for the pursuit.

Shawaal made a gritty 25 amid Pakistan’s horrible start before falling in the ninth over.

The right-handed opener also put on a fighting 20-run partnership with Aroob, who remained unbeaten with 34 in 36 deliveries.

Besides them, none of their batters could turn things around for the green shirts and the side was restricted to 103/5 and thus handed a massive victory to England.

Smale also proved her mettle with the ball as she picked up 2/10 while Hannah Baker and Grace Scrivens struck out a batter each.

Meanwhile, in the Group C clash of the ongoing world cup, dominant West Indies thrashed Indonesia by a mammoth 77 runs to go on top in the group standings.