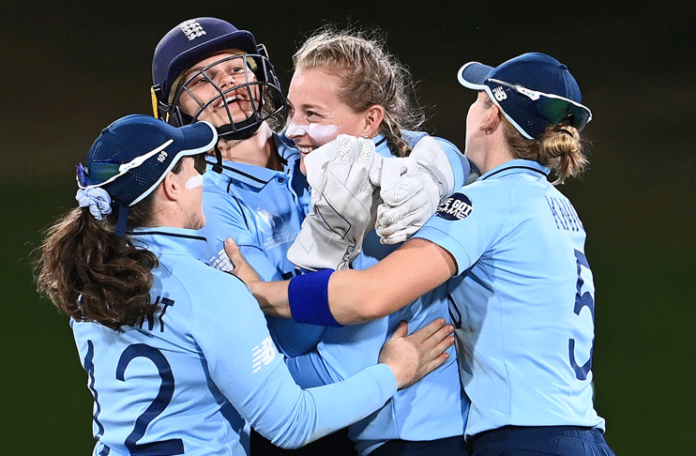 CHRISTCHURCH: England’s opener Danni Wyatt scored a magnificent hundred before the left-arm spinner Sophie Ecclestone starred with six wickets to power the defending champions to beat South Africa by a massive margin of 137 runs in the second semi-final of the ongoing ICC Women’s World Cup 2022.

With England booking their final berth after beating South Africa, the defending champions will now take on the former champions Australia in the final of the mega event, scheduled on April 3.

Batting first, the defending champion England set a commendable total of 293/8 in the allotted 50 overs, thanks to a brilliant century from Wyatt and a gritty half-century from Sophia Dunkley.

Coming out to bat first, England had an unwanted start to their proceedings as the side lost their first wicket for a mere 10 runs with Tammy Beaumont walking back to the pavilion after managing to score just seven.

Wyatt, on the other hand, stood firm and kept the scoreboard ticking single-handedly as wickets were tumbling at an alarming rate at the other end. The right-handed batter then went on to smash a gritty century and laid a solid foundation for a decent total.

She made her way back in the 45th over after scoring 129 off 125 balls with the help of 12 boundaries. Following her departure, Dunkley stood up and scored some crucial runs for her team. She played a gritty knock of 60 runs off 72 deliveries. The pair of Wyatt and Dunkley added 116 runs for the fifth wicket partnership.

The rest of the English batters made small contributions to take their side to 293/8 in 50 overs.

For South Africa, Shabnim Ismail led the way with three wickets, while Masabata Klaas and Marizanne Kapp took two each. Ayabonga Khaka, on the other hand, made one scalp each.

Set to chase 294, the South African batting line-up could only manage to score 156 before getting bowled out in 38 overs as Ecclestone wreaked havoc with her career-best bowling figures of 6/36.

For the Proteas women, Mignon du Preez top-scored with 30, while Lara Godaall followed back with 28. The rest of the batters, on the other hand, could not contribute significantly.