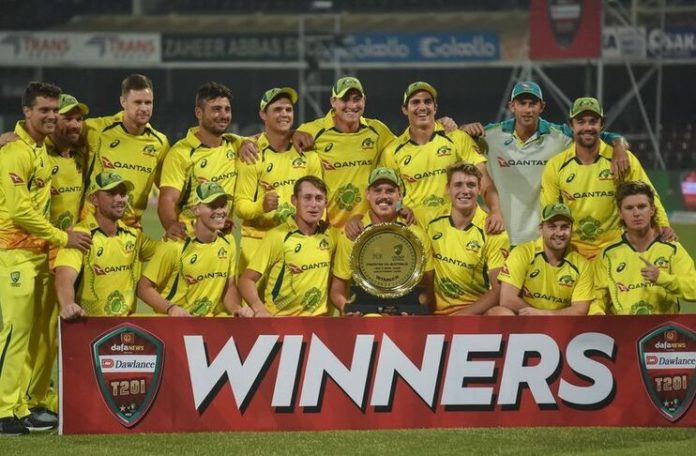 Set to chase 163, Australia sealed a thrilling victory by three wickets in the last over, thanks to the valiant fifty-plus knock from the captain Finch.

In the run chase, the touring side was off to a flying start following the blistering cameo of Travis Head, who scored a quick 26 off 14 deliveries before walking back to the pavilion in the fourth over.

Finch then put on another brief partnership as he paired with the wicket-keeper batter Josh Inglis for the second wicket and added 44 runs before the latter perished after scoring 24.

The right-handed opener Marcu Stoinis then bolstered the touring side’s score with a blistering cameo of 23 runs off just nine deliveries before falling short to Mohammad Wasim Jr.

Finch, on the other hand, stood firm and scored a gritty half-century, while his side was losing wickets at a regular interval. He top-scored for the side with 55 off 45 balls, laced with six boundaries, while Ben McDermott remained unbeaten with his 22 and guided his side to the victory.

After putting Pakistan in to bat, the touring side managed to restrict Pakistan to a below-par 162/8 in 20 overs despite the brilliant half-century from Pakistan captain Babar Azam.

Coming out to bat first, Pakistan were off to a decent start as the opening pair of Babar and the wicket-keeper batter Mohammad Rizwan provided a solid foundation to the home side with a 67 runs partnership.

Rizwan, however, who was struggling to get going, perished earlier in the eighth over after managing to score 23 in 19 balls. Following his departure, the left-handed batter Fakhar Zaman bagged a golden duck as the home side lost two wickets in two balls.

Babar then looked to anchor the innings with Iftikhar Ahmed but the latter could not stay for long as he made his way back to the pavilion after managing to score a mere 13.

The Pakistani skipper Babar top-scored for the side with 66 off 46 balls, laced with six boundaries and two sixes before walking back to the pavilion in the 16th over.

Following his departure, the home side began to lose wickets at an alarming rate and none of the batters could contribute significantly. The left-handed all-rounder Khushdil Shah, however, chipped in with his 24 off 21 balls and remained the second top scorer for the side.

The cameo of the leg-spinner Usman Qadir then bolstered the side’s score to 162/8 as he scored a quick 18 off a mere six deliveries.

For Australia, Nathan Ellis led the way with four wickets, while Cameron Green picked two. Adam Zampa and Sean Abbott, on the other hand, made one scalp each.