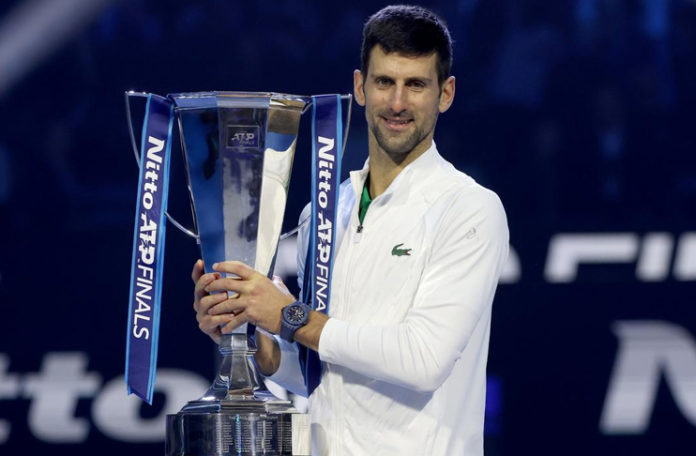 The 35-year-old Serb, the oldest player to win the Finals, ended in style after a season in which he missed two majors because of his vaccine status but also claimed his seventh Wimbledon title.

The win, which also brings a cheque for $4.7 million, came seven years after his last ATP Finals victory and will lift him from eighth to fifth in Monday’s new rankings.

“I made him run, made him play,” said Djokovic.

But the Norwegian held and at 2-1, the Serb began to struggle, raising fears of a repeat of the physical slump he experienced in his two previous matches against Daniil Medvedev and Taylor Fritz.

Djokovic, however, served superbly, not giving Ruud a single break point in the match. He recovered physically and made the all-important break at 5-6 to take the opening set.

The Serb took charge of the second set early on, breaking to open up a 3-1 lead. He served out the match with an ace to claim his sixth Finals crown.

“It is the Finals. Usually these kind of matches are decided by very small margins,” said Djokovic.

“One break of serve was enough in both sets. I knew Casper was playing really well coming into this match.

“We both served really well and I think in some decisive moments, like the 12th game of the first set, I managed to put a few returns back in play.”

It marked the end of an outstanding week for Djokovic who was given clearance to return to Melbourne for the Australian Open in January.

At the start of the year, he was detained and deported from Australia over his non-vaccinated status on Covid.

He was initially barred by the then-conservative government from returning to Australia until 2025 but Australia’s new Immigration Minister Andrew Giles said this week that with a significant easing in pandemic restrictions, the nine-time champion was now welcome to return.

For the 23-year-old Ruud it was a third near-miss of the year. He also lost the finals of the French and US Opens.

“In the end it’s been disappointing to end up losing these big finals,” he said.

“Overall if you gave me an offer to end the year at No. 3, play the finals that I’ve played, at the first of January this year, I would probably sign the contract right away.”

“I’ve overachieved compared to my own mind, so I’m very happy about that.”

Ruud has never taken a set from either Djokovic or his French Open final conqueror Rafael Nadal.

“They have this sort of ability in them to step up when they really have to that I don’t have,” Ruud said. “They always seem to win the close points, the close sets.”

The American Rajeev Ram and Britain’s Joe Salisbury took the doubles title with a 7-6 (7/4), 6-4 win over the Croatian pair of Nikola Mektic and Mate Pavic.