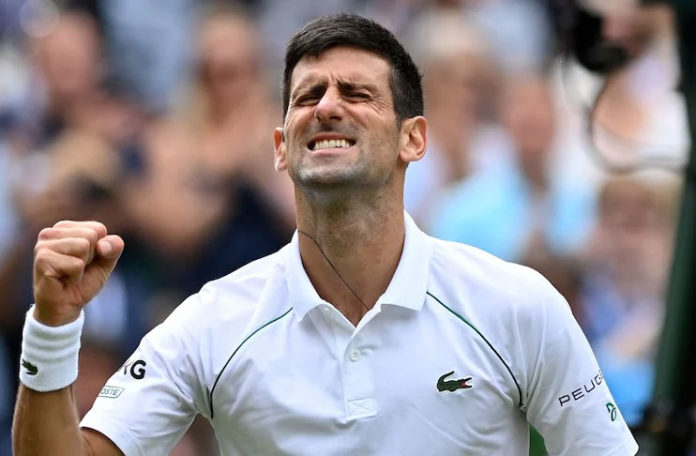 LONDON: The defending champion Novak Djokovic avoided the scare in his fourth-round match as he defeated Tim Van Rijthoven 6-2, 4-6, 6-1, 6-2 to qualify for the Wimbledon 2022 quarter-finals.

Djokovic, who enjoyed a near-perfect run in the ongoing tournament thus far, had to fight hard this time around as he sank the wildcard entrant Rijthoven despite dropping the second set.

The Serb displayed sheer dominance in the opening set as he pulled ahead with an early lead of 4-1, the Dutch, however, managed to claim his second game in the next two, only for Djokovic to claim the sixth to seal the set.

The second set then returned a contrasting result as the unseeded Dutch player Ritjhoven stunned Djokovic from 1-2 down to claiming the second set and levelled the match.

Ritjhoven’s astounding comeback in the second set forced Djokovic to be more efficient in the third set by 6-1 to reclaim control.

The fourth set then followed the same pattern as the defending champion did not let the youngster force another comeback and ran away with a comprehensive victory to secure a quarter-finals berth.

Djokovic will play Jannik Sinner in the quarter-finals after the Italian thumped Carlos Alcaraz in four sets.