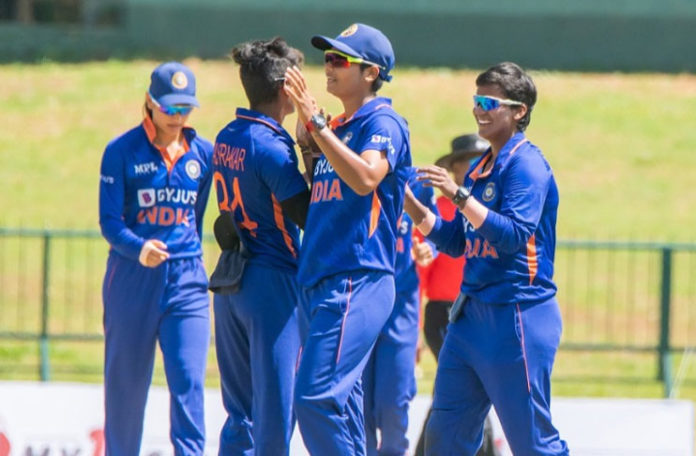 PALLEKELE: Indian all-rounder Deepti Sharma displayed magnificent all-round performance and bolstered her side to seal a comprehensive four wickets over Sri Lanka in the first ODI.

The young all-rounder Deepti bettered her first inning’s three-for with an unbeaten 22 to steer her side to the victory in 38 overs.

Set to chase a mere 172, the touring side had a dismal start as they lost two wickets for a combined score of 17. Opening batter Shafali Verma and the skipper Harmanpreet Kaur then anchored the run chase with their brilliant 44 runs partnership.

Verma, who was aiming to race up her gritty knock, having smashed two sixes and a boundary for her 35, fell in the 16th over to Inoka Ranaweera as the former charged down the track but missed the ball.

Kaur, on the other hand, held her ground firm and ran into another important partnership for the team. The pair of Kaur and newly-joined Harleen Deol batted sensibly and soon saw their side amassing the hundred runs mark.

Sri Lanka’s pick of the bowlers Ranaweera, however, struck gold for her side as she removed Kaur and Deol in her successive overs and brought her side back in the game. Kaur missed her half-century by six wickets, while Deol managed to score 34.

In her next over, left-arm spinner Ranaweera struck again as she removed Richa Ghosh for a mere six and allowed Sri Lanka to make an exceptional comeback.

The unbeaten 38-run partnership between Deepti and Pooja Vastrakar for the seventh wicket, however, diminished the hopes of Sri Lanka as India ran away with the victory by four wickets and 72 balls to spare.

Ranaweera was the star with the ball for the hosts as she claimed four wickets for a mere 39 runs, while Oshadi Ranasinghe made two scalps.

Batting first, the Indian bowlers wreaked havoc over the Sri Lankan batting line-up and bundled out for a skimpy 171 in the 49th over.

Nikashi de Silva displayed resilience against the strong Indian bowling attack as she played a gritty knock of 43 runs and top-scored‘He’s overdoing it’ Misbah on Kohli’s dominating approach towards bowlers for her side.

Besides her, opener Hasini Perera made a significant contribution with her 37 but that too could not bolster Sri Lanka to a commendable total as the rest of the batters could not count big and perished cheaply.

For India, Deepti and Renuka Singh shone with three-fors, while Vastrakar followed back with her two wickets. Rajeshwari Gayakwad and Kaur, on the other hand, struck out a batter each.