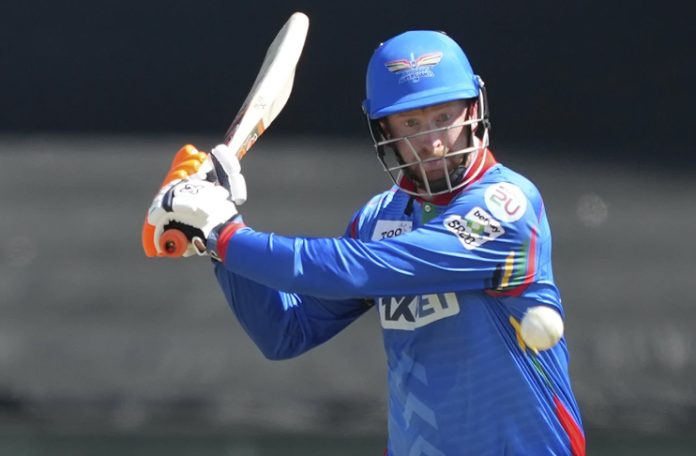 Captain De Kock made 57 from 31 balls while Klassen blasted a sizzling 29-ball 50, smashing half-a-dozen sixes and a four to take Super Giants to a massive 216-run total in the first innings.

David Miller’s Royals, in an even response, managed 189/8, thanks to the courageous fightback from Eoin Morgan and Dan Vilas, who scored 64 off 37 and 44 off 30, respectively.

Opting to bat first, Super Giants hoisted a solid start as Kyle Mayers and Wiaan Mulder collectively smashed 62 inside the first six overs. Mayers fell prey to Evan Jones after scoring 39 from 23 while Mulder went on to build another astounding partnership of 85 runs from 49 balls with skipper de Kock.

Looking solid on 147 for the loss of just one wicket in 13.5 overs, Super Giants lost both Mulder and de Kock within the next five balls to slide to 151/3 before Klaasen displayed his prowess with the bat.

The visiting side, however, went through a dismal start to their chase as England’s World winning captain Jos Buttler was dismissed cheaply (2 from 7 balls) by his compatriot Reece Topley in the third over.

Another Englishmen Jason Roy, on the other hand, managed 33 from 23 balls amid solid bowling attack from Super Giants.

Super Giants broke the middle order with back-to-back wickets as Dwaine Pretorius struck down Wihan Lubbe (18  off 11) and captain David Miller (1 off 3) in the seventh over before Prenelan Subrayen cleaned up Roy in the next over.

Following this debacle, Morgan and Vilas gathered 114 runs from 61 balls to keep the Royals in the hunt before the former England captain was run out in the 18th over.

Topley then cast further jolts on the Royals’ batting line in the 19th over as he hunted down Vilas before removing Evan Jones on a golden duck.