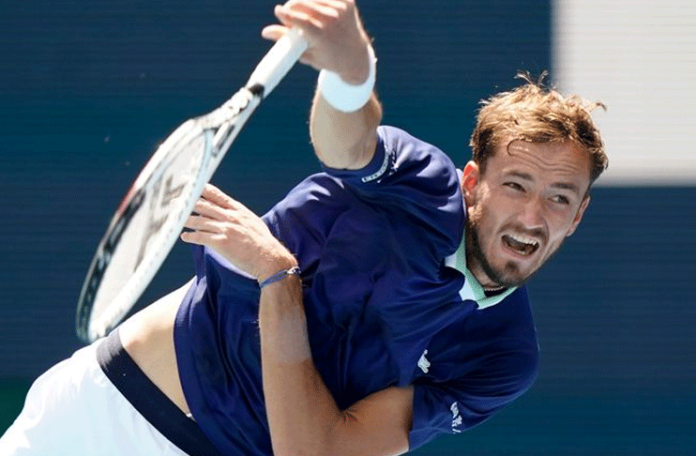 MIAMI: Daniil Medvedev moved into the last 16 of the Miami Open on Monday with a comprehensive straight-sets triumph over Spain’s Pedro Martinez.

The Russian top seed remains the favourite for the title and his 6-3, 6-4 victory was as clinical as the one which sent Andy Murray out of the tournament in the previous round.

Martinez competed well but once he was broken by Medvedev midway through the second set, the reigning US Open champion never looked back and wrapped up the win in one hour and 24 minutes.

“I hit 14 aces and felt pretty good, the second set was tight but I managed to stay consistent,” said Medvedev during a courtside interview.

The 26-year-old will regain the world number one ranking by making the semi-finals in Miami.

Brooksby made headlines at the start of the tournament for throwing his racket toward a ball boy during a first-round win which resulted in a $15,000 fine.

Brooksby knows he has to channel his emotions in the correct way and hopes his decent form continues against Medvedev.

A run to the fourth round of the US Open last year has been backed up with a last 16 defeat in Indian Wells and now the chance to reach the quarter-finals in Miami.

“This is a big learning curve for me,” he told AFP. “I am definitely the type of player that needs to play with emotion.

“But as my coach has said I have to work on balancing it better and finding other ways to let out frustration because what happened was unacceptable and I am definitely sorry. I need to learn from what happened.

“Daniil’s got a very solid game and is obviously in the top two in the world for a reason but the more matches I play on these big stages can only help me.”