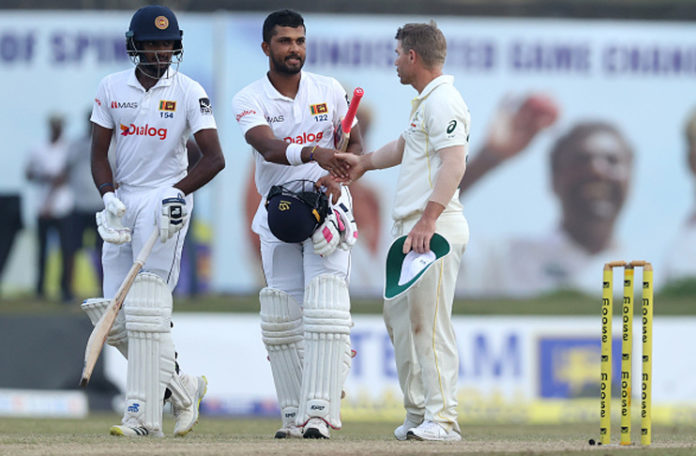 GALLE: Sri Lanka’s middle-order batter Dinesh Chandimal scored a magnificent century after the valiant fifties from Kamindu Mendis and Angelo Mathews to put the home side ahead of Australia on the third day of the ongoing second Test.

Following the batting masterclass from Chandimal, the hosts finished at 431/6, 67 runs ahead of Australia’s first innings total of 364.

Resuming at an overnight score of 184/2, the hosts found themselves in the driving seat after the conclusion of the third day despite an unwanted start as the side lost their overnight top-scorer Kusal Mendis.

Mendis could only manage to add one run to his overnight score as he walked back to the pavilion in the third over of the day after scoring 85. He faced 161 deliveries and smashed nine boundaries.

Following his departure, Mathews and Chandimal carried the proceedings for the team and put them into a commanding position with an astonishing 83-run partnership for the third wicket.

The veteran all-rounder Mathews, who played a valiant fifty-plus knock for his team, could not go big as Aussie left-arm pacer Mitchel Starc removed him for 52. The right-handed batter faced 117 deliveries in the course of his gritty knock and smashed four boundaries.

Following his departure, Kamindu stood up for his team and put on another key partnership for Sri Lanka. The duo added 133 runs for the fifth wicket before Mitchel Swepson claimed his second wicket by casting the left-handed batter for a magnificent 61 off 137 balls, laced with seven boundaries.

Wicketkeeper batter Niroshan Dickwella, on the other hand, could not capitalize on the solid foundation as he could only manage to score five runs in the course of his brief knock.

Sri Lanka’s top-scorer Chandimal then put on a handy 22-run partnership with Ramesh Mendis till the conclusion of the third day. Their valiant stand bolstered Sri Lanka to finish at 431/6.

Chandimal remained unbeaten with his terrific 118 off 232 deliveries with the help of 10 boundaries including a six, while Ramesh scored seven not-out. The duo will now resume the proceedings for Sri Lanka on the fourth day of the second Test.