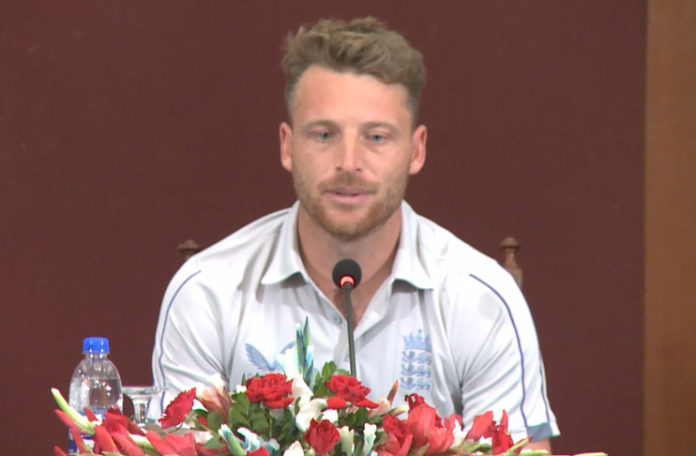 KARACHI: England captain Jos Buttler pledged donations for the flood victims in Pakistan and hoped to bring joy to the people affected by the disaster through good cricket as the England team reached the country for the first time in almost 17 years to take on the home side in seven T20 internationals.

Speaking to his first media interaction in Pakistan, Buttler stated that he was aware of the flood situations in Pakistan and wanted to unite the people in these tough times.

“As a team, we are making donations which will be matched by the ECB as well to help the people in need at the moment” he announced.

“We are very excited to be here (in Pakistan). It’s great to be back as an England team after a long time” he said.

He revealed that England players who had participated in the Pakistan Super League had positive experiences about the country.

“Plenty of our players have been playing PSL and share positive experiences about being here and how much the public love cricket here,” he said.

England captain added that he would benefit from the experience of those teammates who had the experience of playing in PSL since he had never been to Pakistan before and had no idea about the playing conditions in the country.

England’s white-ball captain deemed the upcoming series crucial for the England players to get them ‘familiarize with the roles’ ahead of the ICC T20 World Cup 2022 in Australia.

“We are in a bit of a unique situation as a team, few guys are injured and will be fit in time before the World Cup. Here, a few guys are coming back after (achieving) full fitness so we have to manage them throughout the tour. So, obviously main aim for everyone is to turn up for Australia and get ready for the World Cup,” he said.

Talking about the Pakistan team’s strength, England captain said that Pakistan had the tradition of producing excellent fast bowlers who could bowl with ‘high pace’ and ‘high skills.’

“There are plenty of match winners in both teams and that’s what you need in T20 cricket” he maintained.

While emphasizing the management of the player’s workload and fitness before the World Cup, Buttler said that playing back-to-back games would be a tough task but the team management had to ensure that the players remain in their best shape.

“Seven games will be a challenge,” he said. “We will certainly try to manage our squad and look after them as we do not want to take an undue risk”