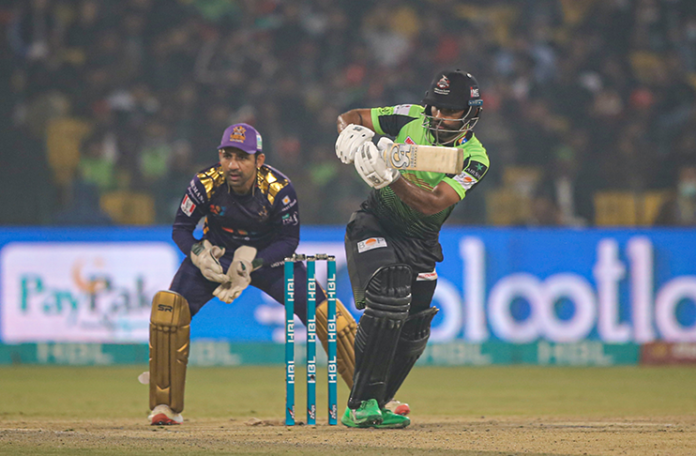 Set to chase a mere 142, Qalandars’ batters sealed a comfortable victory in the 18th over with eight wickets to spare.

The openers – Abdullah Shafique and Fakhar provided a decent start to the side; putting on an important 41-runs partnership. Shafique, however, who was struggling to get going, departed in the sixth over after scoring 19 off 20 balls.

Fakhar, on the other hand, starred again with his bat and went on to smash his fifth half-century of PSL 7. He scored an astonishing 53 off just 42 balls, laced with six boundaries.

Kamran too was handy with the bat as the right-handed batter also chipped in with his half-century. He scored an unbeaten 55 off 39 balls; smashing four boundaries and a six.

The duo of Fakhar and Kamran recorded a match-winning 77-runs partnership for the second wicket; anchoring their side in the run chase.

For the Gladiators, Ghulam Mudassar and Noor Ahmad managed to pick one wicket each.

Qalandars’ skipper – Shaheen Afridi after putting the Gladiators to bat first, laid waste to the opposition in his first over as the left-arm pacer removed the dangerous Jason Roy and James Vince in two consecutive deliveries; pushing the Gladiators on the back foot.

Following the early trouble, Gladiators’ skipper – Sarfaraz Ahmed looked to anchor the innings alongside Ahsan Ali but, he too perished in the fourth over getting run-out for 12.

Ahsan too dismissed briefly as Rashid Khan cleaned him up for eight in the fifth over and as a result, the Gladiators lost their first four wickets for a mere 25.

Gladiators’ returning batter – Umar Akmal then intended to fight back; scoring 25 off just 19 balls, laced with three boundaries and a six. But, his stay at the crease remained brief as he miscued one of David Wiese’s delivery.

Following this, Iftikhar Ahmed stood up for his team and scored a valiant half-century. He scored 52 off just 39 balls; smashing two boundaries and three sixes before falling victim to Haris Rauf.

With some small contribution from the tailenders, the side managed to finish at 141 in the allotted 20 overs; handing an easy 142-runs target for the home side.

For Qalandars, Shaheen and Wiese bagged two wickets each, while Haris and Rashid made one scalp apiece.