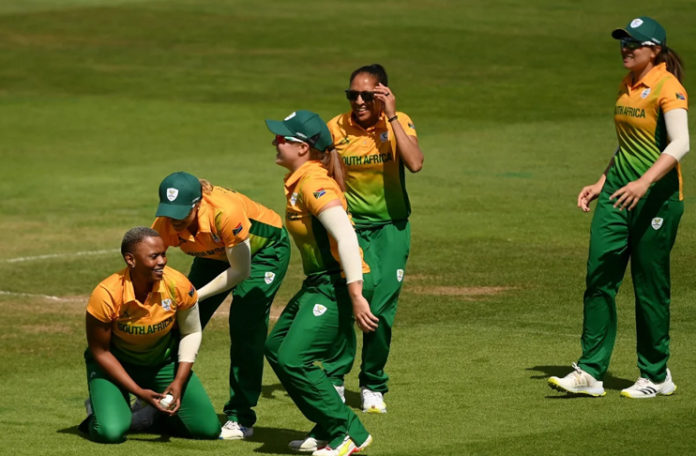 BIRMINGHAM: South African bowlers wreaked havoc over the Sri Lankan batting line-up before the openers easily chased down the paltry target in the seventh over to complete a dominating 10-wicket victory for the Proteas.

Batting first, the Sri Lankan batters had a day to forget as the South African bowlers displayed combined effort to topple the Lioness’ batting line-up for a skimpy 46.

Sri Lankan captain Chamari Athapaththu remained the only batter to display grit for the side as she top-scored with 13, while the rest of the batters could not get into the double figures.

Right-arm pacer Nadine de Klerk led the way for South Africa with three wickets, while Masabata Klaas followed back with two. Shabnim Ismail, Nonkululeko Mlaba, and Chloe Tryon made one scalp each.

Set to chase a mere 47 in 20 overs, Proteas openers Anneke Bosch and Tazmin Brits easily steered their side to a crushing victory in the seventh over as none of the Sri Lankan bowlers managed to break their opening stand.

Brits top-scored with a run-a-ball 21, while Bosch followed back with a quick 20 off a mere 16 balls, laced with two boundaries.

READ: Inam to start his CWG campaign as Wrestling event embarks on August 5