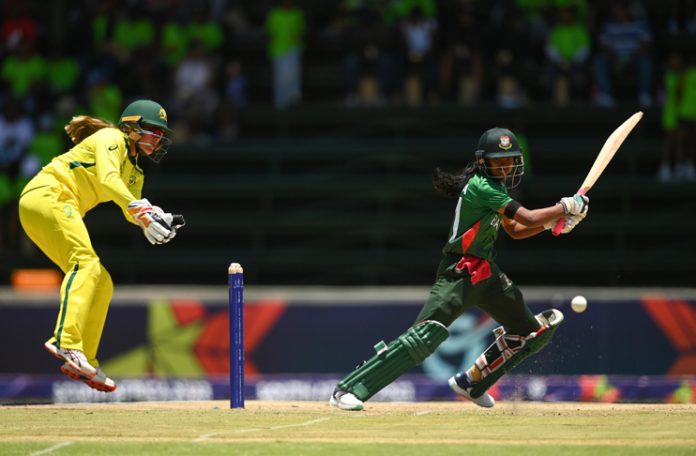 BENONI: Bangladesh put on a collective team effort to down the strong Australian side in the opening match of the inaugural ICC U19 Women’s T20 World Cup.

The inaugural edition of the U19 Women’s T20 World Cup kicked off with a major upset as Bangladesh thumped Australia by seven wickets with 12 balls to spare.

After opting to bat first, Australia could raise a skimpy 130/5 in their allotted 20 overs despite a cautious half-century by Claire Moore.

Bangladesh bowlers put on a dominating show as they kept things tight for Australia right from the start as openers Kate Pelle (5) and Paris Bowdler (7) perished cheaply at a combined score of 22.

Moore and Ella Hayward then attempted to anchor the innings with a gritty 76-run partnership for the third wicket but remained too slow as they conceded 79 balls in the process.

Moore, who brought up her half-century in 47 balls, perished briefly after and remained the top-scorer for Australia with 52 off 51 deliveries.

Australia then lost a couple of more wickets in the death overs with Hayward also departing after a cautious 35-run knock in 39 balls.

The rest of the Australian batters fell clueless against the Bangladesh attack which halted the side from amassing a big total.

Bangladesh in response looked more comfortable in their 131-run pursuit as they lost just three wickets in the expedition.

Unlike the final result, the start to Bangladesh’s pursuit remained quite rough for the Asian side as they lost their opener, Misty Saha, for a golden duck.

Opening batter Afia Prottasha and wicketkeeper-batter Dilara Akter then anchored the run chase with a solid 66-run partnership for the second wicket before both perished in the same over.

Right-arm pacer Chloe Ainsworth provided a much-needed breakthrough to Australia as she removed Dilara and Prottasha on the first and last delivery respectively.

Dilara remained the top-scorer for Bangladesh with 40 off 42 deliveries, while Prottasha scored 24 in 22 balls.

Following their departure, Shorna Akter and Sumaiya Akter then charged on the Australian bowlers and stitched a match-winning 51-run partnership before steering their side to glory in 18 overs.

Shorna remained unbeaten with her quick knock of 23 runs while Sumaiya struck 31 not out off just 25 deliveries.

Ainsworth led the bowling attack for Australia with 2/9, while Rhys Mckenna struck out a batter.

Meanwhile, in another fixture, the United Arab Emirates (UAE) registered a dominating four-wicket victory over Scotland to script a winning start to their World Cup campaign.