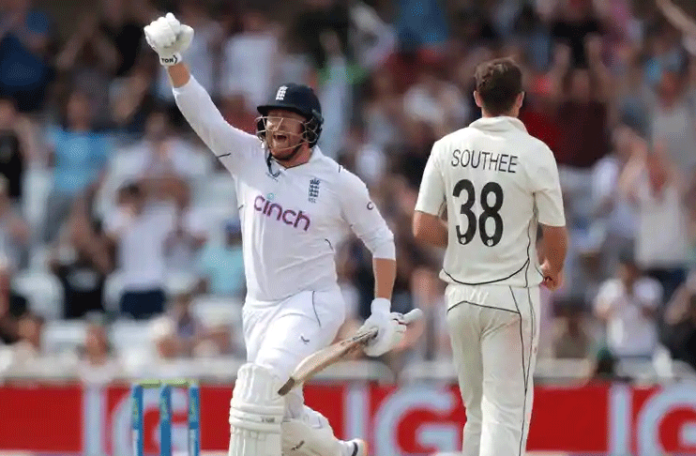 NOTTINGHAM: Jonny Bairstow slammed a match-winning knock of 136 runs off 92 balls coupled with England skipper Ben Stokes’ unbeaten 75 off 70 balls helped England to a remarkable five-wicket win against New Zealand in the second Test on Tuesday, clinching the Test series 2-0.

Bairstow displayed a phenomenal show of power hitting in red-ball cricket as he took only 77 balls to reach the ninth century of his career helping his team to claim the highest-ever target of 299 runs at Trent Bridge.

England chased down the historic target in just 50 overs at an astonishing run rate of around six per over.

The crowd showed in numbers to witness the thrilling final day and were not disappointed by Bairstow and the skipper Stokes, who rained boundaries.

Bairstow smashed 7 gigantic sixes and 14 fours in his glittering knock, while, Stokes hit 10 fours and four sixes to take his side home.

New Zealand were bowled out at 284 before Lunch after they resumed the second inning from 224/7 on the final day.

England, on the other hand, went through a dismal start losing the first wicket in the second over as opener Zak Crawley was dismissed on a duck by Trent Boult in his first over.

England continued to move towards the target while losing wickets at regular intervals and lost 4 wickets at 93 before Tea. England’s top scorer of the first inning, Joe Root, fell cheaply facing just four balls, caught and bowled by Boult.

The final session was dominated by England thanks to the blistering knocks by Bairstow and Stokes, who completely stormed through the New Zealand bowling. Bairstow only left the crease after setting his side in a comfortable position.

Boult starred with the ball for New Zealand but his three wickets went in vain as the Kiwi bowlers leaked too many runs and looked helpless in front of England’s forceful attack with the bat.

England now have an unassailable 2-0 lead in the three-match Test series against the touring side. England won the first Test at Lord’s by five wickets.