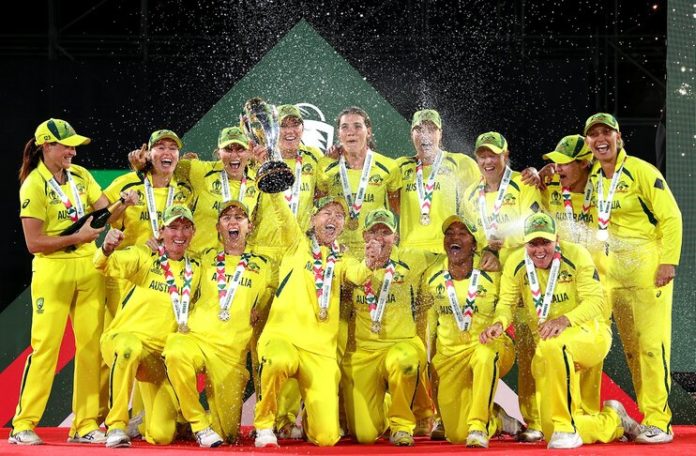 CHRISTCHURCH: Australia’s opening batter Alyssa Healy starred with an astonishing knock of 170 before the bowlers displayed combined bowling effort to power their side to a crushing victory over England and win their seventh ICC Women’s World Cup.

In the final of the recently concluded Women’s World Cup 2022, England’s skipper Heather Knight won the toss and put Australia in to bat first.

Batting first, Australia posted a mammoth 356/5 in the allotted 50 overs, thanks to the monumental knock by Healy. The wicket-keeper batter top-scored for the side with a brilliant knock of 170 runs in just 138 deliveries, laced with 26 boundaries.

Another opener Rachael Haynes and the top-order batter Beth Mooney, on the other hand, scored valiant half-centuries to propel their side to a massive total. Haynes scored 68 off 93 balls, while Mooney scored a quick 62 off 47 balls with the help of eight boundaries.

For England, Anya Shrubsole shone with three wickets, while Sophie Ecclestone could make one scalp.

Set to chase a massive 357, England could only manage to score 285 before being bowled out in the 44th over despite the magnificent knock of Nat Sciver, who remained unbeaten on 148.

The rest of the batters could not contribute in the run chase and as a result, the defending champions England fell 71 runs short of the glory.

Sciver remained the top-scorer for the side with her gritty 148 off 121 deliveries including 15 boundaries and a six.

For Australia, Alana King and Jess Jonassen picked three wickets each, while Megan Schutt took two. Tahlia McGrath and Ashleigh Gardener, on the other hand, struck out a batter each.

READ: ‘My focus was on Pakistan’s win, not on my century’ Imam-ul-Haq