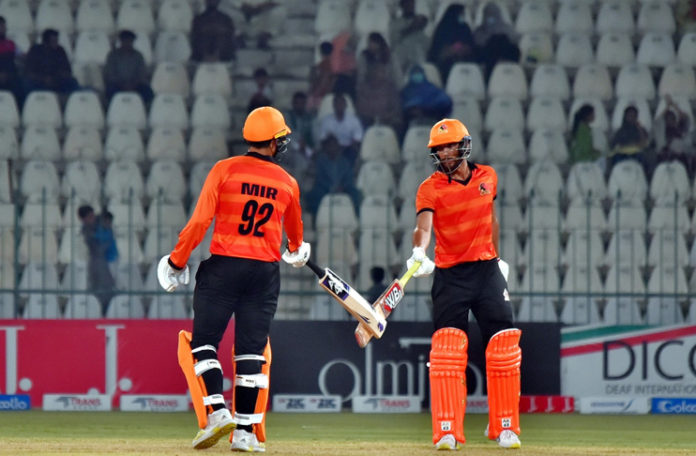 MULTAN: Sindh’s right-arm pacer Asif Mehmood stole the show with the first hat-trick of the ongoing National T20 Cup against Khyber Pakhtunkhwa (KP) before scoring an important unbeaten 28 to power his side to the glory in the 24th match of the tournament.

Batting first, KP could only manage to score 147/9 in the allotted 20 overs despite a brilliant knock of 44 from opening batter Sahibzada Farhan as Sindh bowlers – led by Asif displayed combined effort to halt their expedition to a chase-able total.

The defending champions KP had a poor start to their inning as young opener Mohammad Haris fell cheaply after scoring a mere six while the side lost their first wicket at a combined score of 26 in the fifth over.

Farhan then joined forces with Kamran Ghulam and added a crucial 46 runs for the second wicket before leg-spinner Zahid Mehmood struck in the 12th over to remove both batters in successive deliveries.

Farhan top-scored for KP with 44 off 36 deliveries, laced with six boundaries and a six, while Kamran could score 19 off 21.

The side then began to lose wickets at an alarming rate and as a result, reduced to 147/9 in 20 overs as the rest of the batters could not contribute significantly.

Asif further added to the misery of the defending champions in the final over as he removed Niaz Khan, Mohammad Sarwar, and Mohammad Imran to bag the first hat-trick of the ongoing season.

The right-arm pacer was the pick of the bowlers for Sindh for his three wickets, while Zahid and Sohail Khan bagged two each. Mir Hamza and Abrar Ahmed, on the other hand, struck out a batter each.

Set to chase 148, Sindh steered to the victory in the final over with three wickets to spare as Asif and Hamza added an unbeaten 42 runs for the seventh wicket to power their side over the line.

Left-handed batter Saad Khan top-scored for the side with a valiant knock of 31 runs off 28 deliveries with the help of two boundaries, while Asif scored an unbeaten 28 off 17 balls including two boundaries and as many sixes.

Left-arm pacer Hamza also contributed in the run chase with a gritty knock of 19 runs off 15 deliveries including one boundary and a six.

Following this victory, Sindh dethroned KP from the top position in the points table.