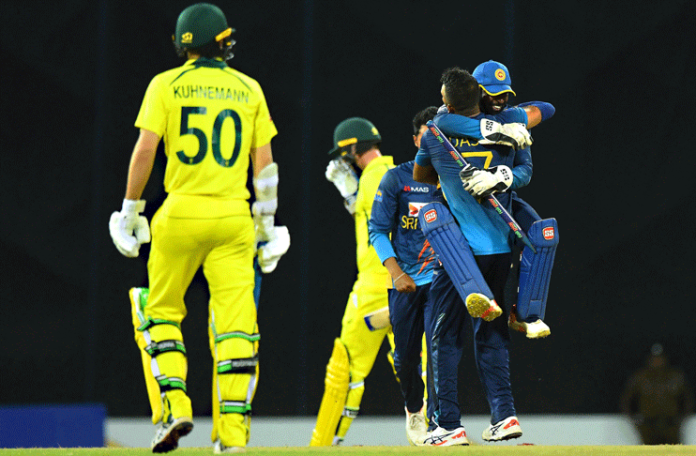 COLOMBO: Sri Lanka’s left-handed batter Charith Asalanka shone with his maiden ODI century before the bowlers held their nerves to power the home side edged past Australia in a thriller and seal the five-match series 3-1, with one match to spare.

In the fourth ODI of the five-match series, Sri Lanka sealed a thrilling victory over Australia by four runs to take an unassailable 3-1 lead at the back of Asalanka’s brilliant century in the first innings.

Set to chase 259, Australia were bowled out four runs short of the victory as Dasun Shanaka held his nerves calm to avoid the late onslaught from Matthew Kuhnemann and successfully defended 19 in the final over.

The touring side had a poor start to their run chase as they lost their first wicket in the third over for a combined score of three. The side kept losing wickets at a consistent rate, whereas, the left-handed opener David Warner stood his ground firm and kept the scoreboard single-handedly.

Warner, who was eying his 19th ODI century, fell just one short in the 38th over as Dhananjaya de Silva claimed his wicket following a brilliant work behind the stumps by Niroshan Dickwella. The left-handed batter scored 99 off 112 balls, laced with 12 boundaries.

Following Warner’s dismissal, the hopes of the touring side also appeared to have diminished but Pat Cummins’ gritty cameo glimmered a ray of hope for them. Chamira Karunaratne, however, then trapped Cummins in his legs for 35 and took the game away from Australia.

Kahnemann, then again brought the touring side back in the game with his handy cameo but could not steer his side to the finishing as he lost his wicket on the final ball while Australia needed five to win.

Batting first, Sri Lanka posted a commendable 258 before being bowled out in 49 overs, thanks to the century from Asalanka and a magnificent fifty from de Silva.

The side were off to a similar dismal start as they lost three wickets for a mere 34 runs in the 10th over. Asalanka and de Silva then anchored the innings with a valiant 101-run partnership for the fourth wicket and bolstered Sri Lanka to a respectable total.

Australian all-rounder Mitch Marsh then struck for the second time to break the all-important partnership as he removed de Silva with a short-of-a-length delivery. The right-handed batter scored 60 off 61 balls with the help of seven boundaries.

Asalanka, on the other hand, stood firm and kept ticking the scoreboard while the Sri Lankan batting tail was crumbling with small contributions by the batters. The left-handed batter top-scored for his side with 110 runs off 106 deliveries including 10 boundaries and a six.

For Australia, Kuhnemann, Marsh, and Cummins picked two wickets each, while Glenn Maxwell made one scalp.

Following this victory, Sri Lanka have sealed the five-match ODI series by 3-1 with one match to spare.