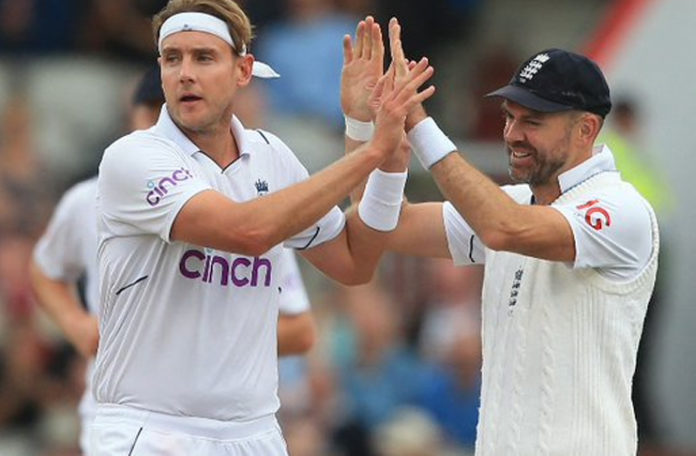 MANCHESTER: England’s magical pace duo of James Anderson and Stuart Broad stormed through the South African batting line to restrict the touring side to 151 on the opening day of the second Test, here at Old Trafford on Thursday.

Anderson shone on his historic 100th Test appearance at home as he grabbed three wickets alongside Broad who also grabbed three to cut short the Proteas’ innings after they opted to bat first.

Jonny Bairstow and Zak Crawley, on the other hand, bolstered their team’s position as they raised an unbeaten 68-run partnership, after initial blows by Kagiso Rabada, Lungi Ngidi and Anrich Nortje, to help England raise 111/3 at the end of the first day’s play.

England went through a dismal start as opener Alex Lees (4) was dismissed early by Ngidi in a caught-behind wicket after facing just seven balls. Whereas, Nortje bowled out Ollie Pope for 23 off 27 while he was looking in fine touch.

England’s reliable middle-order batter Joe Root failed to impress as he could only manage 9 off 15 before Rabada removed him.

Earlier, in the first innings, England’s fierce pace attack ran through South Africa as they lost wickets at regular intervals with tail-ender Rabadda leading the scorecard for his team as he played a valiant knock of 36 off 72, laced with two boundaries.

Besides Rabadda, Kyle Verreynne scored 21 off 49 and Keegan Petersen also managed 21 off 29 amid South Africa’s disappointing day with the bat.

For England, apart from Broad and Anderson, Ben Stokes grabbed two wickets while Ollie Robinson and Jack Leach made a scalp apiece.

England will resume their innings on the second day with the overnight pair of Crawley and Bairstow on the respective score of 23 and 38.

It is pertinent to mention here that South Africa have 1-0 lead in the three-match series as they defeated England by an innings and 12 runs in the first Test at Lord’s.